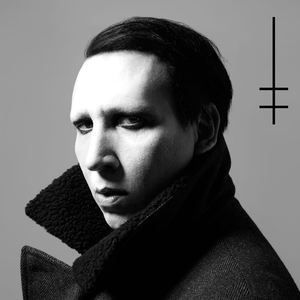 The Antichrist Superstar is back after two years with the album: Heaven Upside Down (2017). It was slated to be released on Valentine’s Day 2017 but when I surfed the web to buy a copy, there was no trace of a new Marilyn Manson album at all. Later on, it was explained that the eponymous lead singer was dissatisfied with the album at that period. Thus, it was officially released on October 6th of this year.

Firstly, I’m a huge fan of the band. They are in my top ten list of favorite rock bands and have never descended below that lineup. When The Pale Emperor was released in 2015, I hoped that the majority of the critical reviews did justice to the content. And I reckon that it was due even more praise than it was offered.

I’ve been listening to the band’s records since 2003’s The Golden Age of Grotesque. I haven’t missed an album since—my favorite still being the immortal Eat Me, Drink Me (2007). But  the albums that followed were just a reminder that there is no band in my favorites list that has a discography with all albums being qualified as good.

I will discuss some of the other albums later on in this review, but for now, I’d like to focus on Manson’s latest effort. Heaven Upside Down is the rock-group’s 10 studio album. These peeps have been on the rock scene for two decades now, and although it’s suffice to say that the highway has not been smooth all the way through, this is definitely not a bump in the road.

The working title of this was Say10 but I think changing it to Heaven Upside Down was the better option as the former name sounds too cheesy (in fact it could have worked as a parody of the band). The starting track is Revelation #12 which showcases how much this album differs from the previous one musically.

Although, I started listening to Manson’s albums that were released since 2003, I’ve heard the singles produced before this era. Not only did Revelation #12 remind me of those songs but the majority of the tracks featured here are reminiscent of the pre-Grotesque age while also paying homage to The Pale Emperor (the title track, Heaven Upside Down, is the most prominent example of this).

Let be me clear, I still hold Eat Me, Drink Me as my favorite Manson album but The Pale Emperor comes at a close second. Whereas bands like Hinder and Linkin Park are still finding it a bit different to become more pop than rock, The Pale Emperor showcased how Manson could compile compositions so electronically-fused (Tyler Bates is one of the finest music producers that I’m aware of), yet so comprehensively different from their counterparts’ transitions into the post-2010 preference of popular music.

Another metal band to successfully do this is Korn, whose 10th album The Path of Totality, topped the US Electronic/Dance Albums chart in 2011. And it was also a fantastic record-one of the best alterations I’ve heard from a nu-metal band unlike Linkin Park’s disastrous foray into pop with this year’s One More Light.

The 1st radio single off Heaven Upside Down was We Know Where You Fucking Live. And it’s as in-your-face as its title suggests. This song is the epitome of industrial rock—a genre that Marilyn Manson along with others such as Nine Inch Nails, White Zombie, etc.—gave mainstream popularity to.

My picks of the best songs off this album are: We Know Where You Fucking Live, Say10, Kill4Me, Je$u$ Cri$i$, Blood Honey and Heaven Upside Down. Though Manson has stated that the lead single and Saturnalia are both centerpieces of the record, I beg to differ, as the latter song is quite overdone. Though it’s a tribute to his late father who passed away during the album’s production, which also explains the exceptional verses, it’s too long at almost being eight minutes long.

One advantage that it has is being placed as 6th on the track listing. I’m not shunning it due to being a lengthy rock song as I regularly enjoy HIM’s Sleepwalking Past Hope (both the recorded and live version). This song is even longer than Saturnalia (it’s a few seconds over 10 minutes!).

The three remaining songs namely Revelation #12, Tattooed in Reverse, and Threats of Romance are good for a few replays but then they quickly become boring. One aspect I noticed about the album was having songs with catchy titles such as Say10 and Kill4Me—as opposed to The Pale Emperor’s philosophically-branded tracks such as The Mephistopheles of Los Angeles and The Third Day of a Seven Day Binge. But the former’s content is lacking in entertainment while the latter’s incorporates Manson’s most thought-provoking lyrics since 2007’s iconic Eat Me, Drink Me.

To end with, Heaven Upside Down is a return to what made Manson one of the 90s pioneers of industrial rock, but it doesn’t offer anything new from the band. It pales in comparison to The Pale Emperor—which not only showcased that the band can trail-blaze—but that they can also revolutionize rock in the pop-dominated 21st century.

You will find all the Marilyn Manson albums that I’ve listened to yet—ranked in the Review Overview section below.