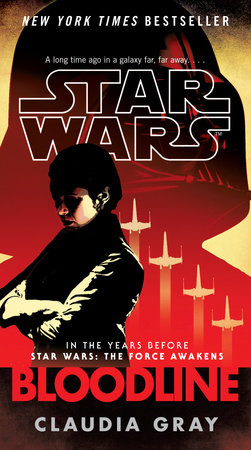 Star Wars: Bloodline penned by Claudia Gray is the first Star Wars novel I’ve read. Having not too long ago found a rekindled interest in the series, I decided to check this highly-acclaimed novel out. Although, it did not turn out as good as I expected, it was still a great read overall.

The Good: The novel does a great job of providing us with a great story that shines more light on the movie The Force Awakens. The plot of the movie had been one of the biggest problems I had had with the movie but after reading the book, it makes a lot more sense. I would highly recommend fans of the series to read it as it would provide a lot of necessary background information about the First Order whose rise had been a bit of a gray area in the movie series. Even if you are not familiar with the series, the story is still a great one that provides enough information for you to appreciate it. The book also has some truly glorious well-written moments which I won’t spoil but they certainly had me lost in the story at times managing to evoke a catharsis of emotions. Featured in this story are iconic characters from the Original Trilogy such as Leia around whom the whole story revolves around as well as some new characters (at least for someone who has only seen the movies) who I had been uncertain about but learned to appreciate later on. I had not really been a big fan of Leia from the movies, especially the Sequel Trilogy, but after reading this book I have learned to respect her character a lot. Moreover, the writer does a great job of painting the picture of the whole galaxy, referring to various races and worlds, which brings life to the story. This will particularly satisfy hardcore fans who would be well-versed in the lore. Personally, I loved the little tidbit references to the timeline of the Old Republic which I am a really big fan of.

The Bad: The novel is heavily centered around politics and for someone who doesn’t find politics very interesting, it had some tedious and long-drawn moments focused solely on this factor. I had not done much research on the book in order to avoid spoilers, so I had been disappointed to find out that it did not really go towards the direction of the Jedi Order which I had been looking forward to. I did not much enjoy the first half of the book that much because of this reason and I found myself yawning at times. The book also featured some heavily clichéd and predictable encounters (as well as characters) which tend to drain the quality of the novel. As a Star Wars fan though, I’m willing to forgive this since it is something that has always been a part of the series but nonetheless, I thought it should still be mentioned in this review.

Overall, Bloodline was a great read which has some glorious moments that any fan of the series no matter which era will thoroughly enjoy as well as readers not familiar with the series. In particular, readers who enjoy politics will find this book very interesting and engaging. The book does have its downfalls, such as being predictable at times, but this did not hinder the comprehensive enjoyment l got after completing the narrative. This novel is a worthy predecessor to The Force Awakens movie and I look forward to reading additional literature under the Star Wars banner.