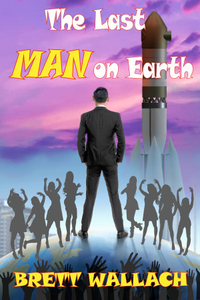 I’ve been a fan of Brett Wallach ever since reading the sixth part in his Phil Allman series of P.I. novels titled Torment (2018). You can read my review of it here. The Last MAN On Earth (2019) is Wallach’s first attempt at a non-detective book. And he shines in his debut.

The Last MAN on Earth follows Leonard Smallwood who is so average that his first name becomes a synonym for mediocre. He is sent to orbit in space for three years while back on earth the world’s entire male population is wiped out. So when Leonard returns back home he is the last man on earth.

The premise is quite original. Although, the plot showcases the novel as a work of suspense, it is actually a mixture of mystery, science-fiction, comedy, and romance. It is extremely difficult to balance more than one genre but Wallach skillfully manages to master at least four categories. This is even more impressive seeing how this is his foremost effort at a work of this kind.

Besides the original story, I also favored the name-dropping of movies, actors, bands, etc., from popular culture such as Ransom, Clint Eastwood, The Beatles, and many more. As a media studies graduate, it was refreshing to read a yarn laced with material that I’ve studied about during my university years.

The most positive aspect about this book is its excellent pacing. Just like Wallach’s previous effort, Torment, The Last MAN On Earth is extremely well-paced. This allows the narrative to never get boring as it never slows down at any point.

However, the novel does have its flaws. The plot gets very predictable at times especially during the middle chapters. I felt that Wallach wasn’t able to completely capitalize on the full potential of the story. Comedy is an element which is used continuously in the tale but I found some jokes repetitive and most of the wisecracks weren’t funny at all. There were also some editing errors such as typos and grammatical mistakes. Furthermore, the constant change of character points-of-view came across as tedious.

Nevertheless, The Last MAN On Earth manages to end as awesomely as it began. The novel, even though lacking in some areas, is an immensely enjoyable read from start to finish—especially due to its superb pacing. It will also appeal to a large variety of readers owing to its multi-genre structure. Given that this is Wallach’s initial try at a book of this type, I can’t wait to read the next entry in his literary career.