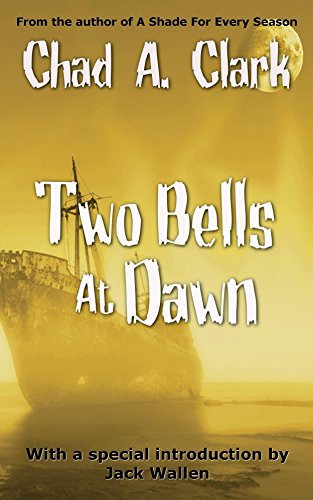 Two Bells At Dawn (2017) begins with a Foreword by Jack Wallen and I’m kickstarting this review with an excerpt from those wonderful words.

If we make a parallel from the theatrical to the written medium, flash fiction is to writing what monologues are to acting. For the writer, they are a means to quickly learn how to tell a solid story. So anytime I see a writer exercising their craft with the monologue of the written word, I want to cheer them on.

As you can see from the paragraph above; Mr. Wallen suitably compared acting to writing. Yes, it’s true that writing a full-length work is easier than a shorter one, yet both mediums require an equal amount of finesse from the wordsmith.

Flash fiction is becoming quite popular nowadays. This is primarily because people who are online tend to read shorter stories more frequently than longer ones. There are also many renowned websites that feature such stories like Everyday Fiction and Flash Fiction Online.

Chad A. Clarke’s book comprises of over 20 fictional shorts. They are written in the genres of horror, sci-fi and dark humor. So, there is enough diversity to not get bored while reading this collection. Where other authors mostly use one mode of storytelling; Clarke utilizes both first-person and third-person narratives and thus making every story as distinct from one another as much as possible.

I never felt that a fable was either too short or being dragged on by the author. Sometimes I had the pleasure of being awestruck when the writer ended one tale all of a sudden. The feeling is comparable to watching a cliffhanger to a one-part movie. There were many times I wished these stories could be longer as I became so easily infatuated with the characters and the settings.

The paramount factor is the characters. Regardless of them being male or female (or not even human) we are able to relate to their feelings of dread and hopelessness that they are going through. A constant theme I noticed throughout the book was nihilism. Even the satirical ones did not include a light at the end of the tunnel. There’s only a minority of tales that are light-hearted or even have a happy ending. But even in these the sarcastic tone is ever present.

This is why I loved reading Clarke’s writing style. It does not hold back like a boxer trying to lose in a fixed match by pulling their punches. Clarke is all in with his crazy individuals, bleak locations and twist endings. I reckon that the conclusions to the stories were superior to their plots. No doubt other readers will agree to this statement after they’ve gone through this superb collection.

Most of the stories are awesome, some are mediocre but there are none that are of low quality. This is a unique factor for a literary collection to not have any entry rated as bad. As there were so many high-class yarns, it was hard for me to pick out favorites, yet I managed to compile a few. These were: Always On The Bus, Excursions, Together-In The End, Flight Of One, Knock (a great Halloween tale, I must add) and Tech Support.

I was surprised to find that the titular tale, Two Bells At Dawn, was not included in my top seven picks. This might be because it appeared so late into the compilation that I became familiar with Clarke’s writing style. So, the twist ending was quite foreseeable for me and I found the plot a bit clichéd as well.

All in all, I undoubtedly declare Two Bells At Dawn to be one of the finest collections of literature I’ve ever read. The inclusions are in three categories allowing for incomparable versatility. These stories might be short but they will stay with you for a long time after you’ve completed them.