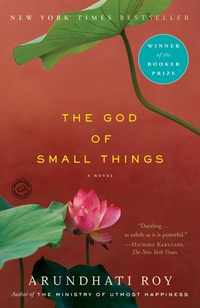 After I finished reading The God of Small Things (1997), I felt that I’ve read similar stuff before. Not only did the story seem clichéd, but the writing style felt reminiscent, despite this being my foremost reading of an Arundhati Roy book. The plot follows a dysfunctional Indian family, and the narrative is told primarily through the eyes of the young characters; the twins Rahel and Estha. The story is mainly about the transition from childhood to adulthood of these afore-mentioned individuals. In a way, the plot is a coming-of-age yarn, however, the major genre remains drama.

Why did The God of Small Things feel so familiar? Mostly because Roy’s writing style reminded me of two other authors namely R.K. Narayan and Aravind Adiga. The former is renowned as the most popular English-language Indian writer of all time (and my personal all-time favorite in regards to Indian English literature), and the latter is an Indo-Australian author who is most well-known for his debut novel, The White Tiger, which won the 2008 Booker Prize for Fiction (and deservingly so).

But Roy neither has the comical skills of Narayan nor the sarcastic flair of Adiga. She shares a tad of plot stylization techniques from the former and a fast-paced technique of writing from the latter. Narayan was a writer with an internationalist bent of mind. His novels and short stories could appeal to any reader. Roy, on the other hand, has a writing style which, in my opinion, could only satisfy Asian or semi-Asian readers.

One main reason for my afore-mentioned statement is the storyline of The God of Small Things. The Indian family depicted in the tale has at least two of its characters who have studied abroad, one who is an aspiring Marxist, another who is a female divorcee, etc. Only readers of Asian nationality or South Eastern origin can relate with these types of characters. Furthermore, Narayan never over-used Indian-language words in his works. However, Roy always utilizes too many words either from Malayalam or another language of India. Narayan also used foreign words which could easily be understood by foreign readers but Roy uses them to the point of exhaustion. I also felt that her repetition of some statements and sentences was irksome.

The worst aspect of the book is the narrowness of its appeal. As mentioned earlier, in contrast to Roy’s fiction, Narayan’s bibliography had a universal allure. I reckon that The God of Small Things is more likely to be appreciated by women than men, by readers of the literary genre than readers of other categories, and by South-Eastern readers than Western readers.

Nevertheless, The God of Small Things is not just another entry in Indian English language fiction. Roy’s  writing style might not be up to par with the greats, but she can still describe characters, scenarios and sceneries with the utmost imagination. Description-wise, she is one of the finest writers I’ve come across, and to a man who has read at least a hundred works of fiction, I hope that does count for something in terms of a critical analysis. The story, though of the sentimental kind, never gets slowed down by over-description, and thus, never gets boring throughout the novel’s 300-plus pages. Her excellent talent for depiction also remains consistent from start to finish.

Where Roy absolutely shines, and even overtakes Narayan and Adiga, is in her portrayal of lust and sex. There is only one sexual sequence in the novel but it is one which is worth reading over and over again. It is so profoundly written that I have to deem it the best scene of eroticism that I’ve ever read in a work of fiction.

All in all, The God of Small Things is Arundhati Roy’s debut novel, and this factor prominently shows throughout the entirety of the narrative. As a first book, it is a fine piece of literature. But as a 1997 Booker Prize for Fiction award winner, I felt it didn’t live up to this accolade, unlike Aravind Adiga’s The White Tiger.