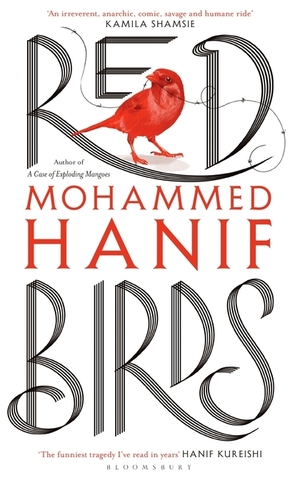 Mohammed Hanif is, and after finishing his latest entry titled Red Birds (2018), will always be my favorite Asian writer of fiction of all time. His prose is as in-your-face as it can get, and his satire has a razor-sharp bite. Many readers of postcolonial literature cite Mohsin Hamid as the best Pakistani writer in the English language, but Hamid’s storytelling skills are only half that of Hanif’s, at least in my opinion.

The name Red Birds is derived from the folklore theory that when a person is killed, the last drop of their blood transforms them into a red-colored bird. This novel incorporates that philosophy in practical examples as well.

What I loved most about this book is the versatility used in the illustration of the three main figures. One is an American pilot named Major Ellie who has crash-landed in a region he was sent by the military to bomb. The second is Mutt, and as the name suggests, he’s a dog with a cunning mind of its own, and probably the most original character that I’ve come across in novel-form lately. Last but not the least is Momo, a teenage refugee who dreams of becoming a successful businessman. Most of the yarn is spun through the viewpoints of this trio of individuals.

Each and every line carries the signature of Hanif’s trademark wit. The descriptions are vividly dark. And though the narrative is mostly told in a humorous fashion, there’s no shortage of realism in the tale. The aftermath of war is one of the major themes discussed in this book and it’s also deeply explored by the author. We get an insight into the dual sides of a war: the people who are hired to expedite it, and the poor victims who lose everything, even when they might be innocent bystanders.

Plato’s quote, “Only the dead have seen the end of war”, can be used as a one-line definition for this novel.

Red Birds is not without its defects. Even though the start and the middle portions are exceptionally well-written, the novel loses its consistency in the final half. The ending, though emotionally penned, is anti-climactic. Maybe if the length was longer than the 283 pages of the hardcover version, there might’ve been space for elaboration. The conclusion seemed as if the story had suddenly arrived at a stop sign and decided not to continue any further.

All in all, Red Birds is a must-read for fans of the literary genre. It’s superior to Hanif’s barely memorable sophomore outing Our Lady of Alice Bhatti (2011)—you can read my review of it here. And it matches the sheer quality of his debut novel A Case of Exploding Mangoes (2008). If only the finale of Red Birds was better, then it would’ve qualified as the best novel that I’ve read this year, yet it’s deservedly one of the finest examples of long fiction released in 2018.

You can purchase Red Birds on Amazon here.