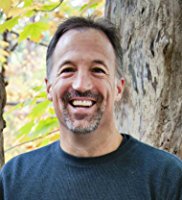 Garden of Fiends (2017) is our leading book review, so it comes as no surprise that the developer of this project, Mark Matthews, is our guest for Literary Retreat’s first interview. Mark is a writer with books primarily in the genre of addiction horror. His best-known works include Stray, Milk-Blood and All Smoke Rises. So read on and enjoy our insightful conversation with him.

I grew up a fan of horror, and with a love for reading. My first two novels were not horror but certainly dark, and I found writing the darkest parts the most fascinating and what came most natural. At this point, it’s not that I write horror, but I write what is inside me and it is called horror. I think the genre has a unique capability to shine the light in the darkest of places, and to be socially relevant at times, straight out fun at other times. As for personal experience, I certainly have my share of scars, the way all of us do.

Part was my own recovery from addiction. I nearly died from substance abuse. I’ve used every drug as described in the book but I’ve been clean now for 24 years. When I got clean, I found helping other addicts incredibly rewarding and as much a career as a calling.  The counseling degree provided the theoretical framework, education, and experience to help facilitate change in others.

My first novel STRAY received a fair bit of attention and positive reviews on Amazon, and this really energized me. MILK-BLOOD probably become the most popular, and garnered the attention of a small movie company who optioned it for film. I’m incredibly proud of it, but I think I would offer up ALL SMOKE RISES as my most well-written piece to date.

Any answer I’ll provide I’ll want to change a few moments from now, but I can’t ‘not’ name Poe and Kafka. I also grew up wanting to be Jack Kerouac.  I enjoy socially relevant, transgressive, breaking the boundaries horror, where the internals of the character matter as much as what is happening outside. Some random others: Mark Twain, Hunter S Thompson, Gillian Flynn.

Family. Hockey. Running. I’ve run 13 marathons, but I had a major back injury playing hockey that left me with major back pain and with no feelings in part of my legs. I walked with a limp for many months, and now I’m damaged goods forever. Now I don’t run anymore.

The idea was bubbling in my brain after the success of MILK-BLOOD and ALL SMOKE RISES. I wrote up the initial call for submissions and how I would like to see it work out (with longer pieces and novellas rather than a ton of short stories) and it was when I talked with John FD Taff about the idea I felt inspired to take the leap. He really played a huge role, and my wife for agreeing to the monetary investment. The book has been out a month, and has done really well. Dark fiction with an addiction theme is a niche that I have a personal investment in, and it has been wonderful to see how other writers have tackled the subject.

There were plenty that I labored over, and if I hadn’t need to move on, would have preferred to read a re-write.  At least one of these has been self-published since to some incredible reviews. I’ve invested thousands of dollars into this project, and in order to accept more, I would have had to invest more and thus sell even more books to even break even.  There were so many factors in accepting the submissions, including wanting a mix up of tone and a mixture of substances used. I didn’t want all stories about heroin or all stories about alcohol, for example. I knew going in there was the risk of repetitiveness, so I tried hard to avoid that.

Well, my own isn’t my favorite, but I won’t and can’t name one anyways. Like your children, there are some who are just more enjoyable on one day more than the other. Each story has its own truth, and if I took one out, the whole thing would collapse.  I will say that Kealan’s is a perfect opener, and that Jack’s is the perfect closer (um, see below about that).

To have a Ketchum story in the anthology, cliché to say, was a dream. Like others in the anthology, Ketchum is a writer I emulate. His story was reprint, but it is a perfect fit for the ending. There is a sense of sad closure to his story Returns, where a spirit visits his ex-lover and watches her destroy herself with alcohol, and wonders what his purpose is in the return.  When the spirit learns his purpose and leaves the alcoholic behind, I liken it to the reader visiting the addicts in the book, but then closing the covers and moving on.

Funny you should ask. Someone has already asked for a Garden of Fiends part 2, and I joked about the title: Forest of Fiends?  The original is just, just starting to crawl, so no need to worry about the sibling when it’s so rewarding to see this one grow.

Thanks for having me!

Check out Garden of Fiends on Amazon here (US)