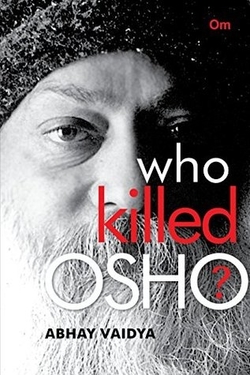 Due to decades of journalistic experience and a meticulous approach to research, Abhay Vaidya has written a stunner of a non-fiction account which is part-biography and part-thriller, and is likely to entertain readers of both genres.

I became interested to read Who Killed Osho? (2017) after watching the hit Netflix docu-series Wild Wild Country which also follows the same subject, albeit focusing on the titular Osho’s commune’s establishment in Oregon rather than the circumstances surrounding his sudden death. Who Killed Osho? not only serves as a worthy precursor to the show but is also superior in terms of content. This could be due to two reasons. One is that it is a book and hence has more to offer than a six-part miniseries. Secondly, it has the advantage of having been created by a national (Vaidya) instead of a foreigner (The Way Brothers). Nonetheless, both of these works serve their purpose of introducing us to the controversial figure known as Rajneesh Osho.

Although, the venture is thoroughly researched and the findings are presented in a chronological manner, there are times where many facts are repeated over and over again for no reason. This aspect isn’t bothersome when the revised statement is a reference point to another passage, but oftentimes I found the former cause to be more frequent. Another flaw, though the author should be forgiven for this, is that the book constantly asks questions instead of answering them—but in the end this could be due to the category of the piece.

Who Killed Osho? might not give us a definitive reply to the question its title poses, yet its subjective ending helps us get even more deeply entangled in the mystery which encompasses one of the world’s most influential people’s demise.