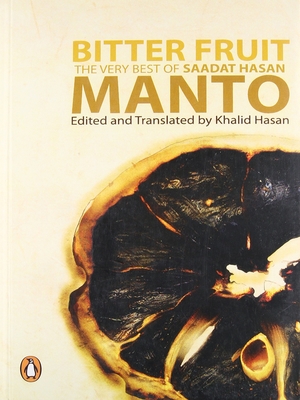 Bitter Fruit (2009) is an English-language compilation of Saadat Hasan Manto’s oeuvre of Urdu writings. It does not comprise of all of his writings but contains an abundance of his short stories, flash fiction, a single play, biographies of famous personalities, autobiographical notes by Manto, and biographical notes dedicated to him by his friends and family.

Before starting the review I’d like to mention that Khalid Hasan’s translation skills are awesome. I have read translations of Russian and Polish literature but they are usually off point, but Hasan’s interpretations hit the mark every time. I didn’t find any part confusing nor did I feel the quality of the translated work, whether fictional or non-fictional, drop at any point.

I’d also like to add that this not my first review of a Manto-related work. I have previously reviewed the Nandita Das directed and Nawazuddin Siddiqui starring 2018 biopic Manto. You can read my review of it here.

The book kicks off with Manto’s short stories. I am not certain whether these are all of Manto’s works seeing that he had produced twenty-two collections of short stories during his lifetime. Most of them take place either just before, during, or right after the Partition. Although, I liked almost all of the stories, I have still made a list of the ones which I favored the most (in order of preference):

The above are my top ten favorites out of the total fifty-one tales. I also felt that some stories were repetitive in nature in the sense that the theme of Partition overshadowed the tone of a minority of the narratives. I am also not sure how many of the stories were semi-biographical as I found at least two stories, Siraj and Baba Gopi Nath, with Manto. The Supplication is a story where Manto is not depicted as an individual but later on when I came upon the autobiographical notes, I found out that Manto had experienced what one of the main characters went through in that story. Thus, it could be possible that the stories in which Manto was not a figure might’ve had semibiographical elements in it.

I am also glad that Manto’s best-known works such as Toba Tek Singh, Colder Than Ice (translation of Thanda Gosht), The Return (translation of Khol Do), The Gift (translation of Kali Shalwar), and Odour (Boo) show up in the top-twenty order of the short-stories’ table of contents. The Gift shows up after the first ten stories but it nevertheless is part of the foremost lineup. Toba Tek Singh is the second story though it should be the first as it is perhaps Manto’s best-known story, and in my opinion, his finest piece of fiction. What I disliked about the translated versions were their titles. Colder Than Ice and Odour do justice to their original namesakes, however, The Return and The Gift are far cries from their actual names. Thus, I think it would have been a better idea to have written the Urdu titles alongside the English ones.

The most unimpressive story was A Strange Tale as Manto tried his best at taking a more literary approach to this yarn compared to his other stories but instead of being awed by it I was left confused. Other stories which were letdowns include Green Sandals and Night Whispers.

The following segment is Drama which contains one play by Manto titled In This Vortex. In my viewpoint, this script played out like an average HUM TV drama. The story was predictable though the dialogues were good and the ending was unforeseeable.

What follows the Drama section is Sketches. These are works of flash fiction comprising of tales ranging from one sentence to a few paragraphs in length. I loved all of them and they actually came across as superior to their longer counterparts. It was difficult to choose which ones I favored the most but the best were Losing Proposition and Pathanistan. Again, this section was perfect showcasing Manto’s prowess at saying so much in so little words.

The next section is Portraits. Here, the only biographical account which was not Manto’s was the first entry, Jinnah Sahib, which is a retelling by one of Mohammad Ali Jinnah’s former drivers about his time spent under the late Founder of Pakistan. The other biographical entries are Manto’s own accounts and include entries about his famous friends such as Ashok Kumar and Shyam, his mentor Bari Alag, other renowned celebrities such as Nargis, Kuldip Kaur, and Nur Jehan, and many more. All of the parts in Portraits were absorbing which led to my newly found awareness of Manto’s talent for non-fiction writing.

Portraits is followed by a very unique section titled Letters to Uncle Sam. There are a total of nine letters which Manto had written to America in a literary sense but these had never been published during his lifetime. All of them are entertaining to read and show Manto’s wide knowledge of international politics which would could not have been ascertained by reading the works preceding this segment.

The penultimate section is Manto on Manto which contains four entries namely To My Readers, A Day in Court, Manto on Manto, and Manto’s Epitaph. These are also worth reading and again prove that Manto was as talented a writer of non-fiction as he was of fiction.

The last section is Appendixes which includes three entries—Uncle Manto by Hamid Jalal, Manto Family Conversations, and Friends of Manto Reminisce about Him. I always wondered what Manto’s close associates thought about him and his writings and I was pleased that the translator included these insightful notes. Manto’s nephew Hamid Jalal’s thoughts, both before and after his uncle’s death, were thought-provoking and showcased his own skill as a writer.

To end with, Bitter Fruit is probably the ultimate collection of fictional and non-fictional works by Saadat Hasan Manto. Not of all the book’s contents are excellent but the majority of them are, and for a 700-plus page book, that’s more than enough motivation to have a go at it. Manto might not have been as celebrated when he was alive as he is now, but it is amazing that his legacy has left such an everlasting imprint on the literary world—and I am certain there is no other Urdu writer who has written so freely on taboo subjects (in the case of Pakistan) such as rape, sex, prostitution, drinking, etc.