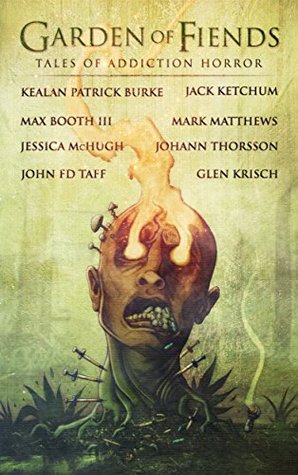 I have read over hundreds of novels and reviewed over half of them. Most of them are in the genres of thriller and horror and these are my preferred types of literature. Last year, I heard that an anthology helmed by Mark Matthews suitably titled Garden of Fiends, was open for a call for submissions. Why was I so intrigued by this compilation? Because I’ve never come across addiction horror before. I’ve dedicated this review to Mark and all the other artists involved in this book. And I hope that my review does justice to it. The below paragraph contains an excerpt of the book’s description:

The intoxication from a pint of vodka, the electric buzz from snorting cocaine, the warm embrace from shooting heroin—drinking and drugging provides the height of human experience. It’s the promise of heaven on earth, but the hell that follows is a constant hunger, a cold emptiness. The craving to get high is a yearning as intense as that felt by any blood-thirsty monster.

The book contains six novellas, one flash-fiction piece and one short story. I have to mention that the first factor which attracted me to the book was its incomparable cover designed by Zach McCain. It really gets your blood boiling for the contents of the book. And it also suits the titular tale.

Firstly, we have A Wicked Thirst by Kealan Patrick Burke. The fable starts out romantically. The seductive descriptions are brilliantly balanced with the nocturnal thoughts of the main character. The story was the perfect starter as it was one hell of an eye-opener. The plot follows an alcoholic on a date with a newly-found fling and is also haunted by an evil presence. Burke is a Bram Stoker-nominated author and this entry proves that there is no proof to the contrary that he isn’t.

The second story is none other than The One in the Middle by Jessica McHugh. This one is bloodier, gorier and totally distinct from the introductory tale. It’s a section taken out from McHugh’s novel The Green Kangaroos but just as impactful. Not only is it one of the finest in the compilation but also one of the best horror novellas I’ve ever read. The storyline is about a drug addict who has to sustain his thirst by contributing to a body-mutilation process known as potsticking. I can’t give away any more as you’ll have to read for yourself. Warning: Finishing this tale can lead to insomnia.

Thirdly, Garden of Fiends is the titular tale written by the editor of the book, Mark Matthews. This deserves to have its name on the cover. I haven’t read my friend’s work before and now I realize why he’s so highly applauded in the horror community. This novella is one of the longest in the anthology and its central theme comprises of family. It’s about two parents who struggle to keep their heroin-addicted daughter clean. There was less humor involved than the previous two entries but rightfully so. This is a masterpiece of addiction horror and it isn’t recommended to the faint of heart. Matthews’ milk-blood infused literature burning with decades of counseling experience will leave your eyes sticking out of their sockets. There is no amount of praise which can do justice to the uniqueness of this story. A must-read for horror fans and other genre enthusiasts alike.

Fourth up we have First, Bite Just a Finger by Johann Thorsson. Following the afore-mentioned longer story, this piece of flash fiction is quite a mouthful, no pun intended. Icelandic author Thorsson knows that the key to short fiction is telling as much in as little length as possible. This is one of the best in this collection of horror, and the paramount horror flash-fiction I’ve ever come across. The addiction featured here is unheard of before—at least by me.

Fifth is Last Call by John F.D. Taff. Just like Burke’s chilling opener, Taff’s Last Call is also centered on alcoholism. It’s also superior to Burke’s story. The plot follows an alcoholic who receives a bottle containing a mysterious liquid which is entailed to rid him of his addiction. Swift at pacing and full of intoxicating illustrations (especially pertaining to alcohol), you wouldn’t want a drink after concluding this one. Taff proves he has twenty-five years of literary experience with the finishing line of this magnificient yarn.

Sixthly, we have Torment of the Fallen by Glen Kirsch. It starts off with a verse from the Bible; a foreboding that the story will be biblical in nature, and it undoubtedly was. This was the most original tale in the collection due to its fusion with the supernatural genre of dread. I loved the three major individuals, and according to my opinion, this story would’ve been more applicable to kickstart Garden of Fiends. I will definitely check out Kirsch’s other pieces of bibliography in the near future.

For the seventh story, we have Everywhere You’ve Bled and Everywhere You Will by Max Booth III. There is a saying to save the best for last but here the second-best was saved for second-last. This tale doesn’t seem to belong in the category of addiction horror though it does include the enslavement to heroin. It would rather be a suitable entry in a collection of erotic terror. Pornographic throughout, I wouldn’t mind a film adaptation of this horrific eye-opener. I’m an eternal fan of Booth now and hope his novels also share the sexual finesse this novella was full of. His writing style is reminiscent of my favorite British artist, Clive Barker. The plot follows the protagonist, Jeremy, suffering from hepatitis C and bleeding out from his genitalia. If you’re not a fan of nude explicitness mixed with gore then skip this story. If you are then you’re in for one helluva ride.

Last but not the least, we have Returns by Jack Ketchum. It’s a ghost story tainted with alcoholism. I first came across Ketchum in the form of his 2011 co-written flick, The Woman. After watching that I was convinced he deserved the title of Grand Master in 2011 voted by the World Horror Convention. This story is the second shortest in the bunch (only six pages long) but just as powerful as Thorsson’s piece of flash fiction. This is the third entry of alcohol serving as the thematic addiction. It will hurt even more after finishing if you’re a cat person. Ketchum is noted to be more a hardcore storyteller but here he has shown his sensitive side, though it’s not low on the fright factor. This is not the paramount inclusion in Garden of Fiends but it’s the most emotional one. I’m mentioning this in the top five of the eight entries featured here.

Now, I would like to sort each story from best to worst: Garden of Fiends, Everywhere You’ve Bled and Everywhere You Will, The One in the Middle, Torment of the Fallen, Returns, First – Bite Just a Finger, and A Wicked Thirst. I found Garden of Fiends to be the finest as any reader could relate to the tone of family love. A Wicked Thirst I found to be the weakest as it was too simple for my taste. Still, all of the featured stories are definitely worth reading.

To end with, Garden of Fiends is an unputdownable collection. Mark mentions in the book that somewhere a person is celebrating twenty-four hours sober, while in another part of the globe, a person has been sober for twenty-four years. In the Acknowledgements section Mark states, “Finally, thanks to those who have made a calling out of helping addicts and dragging them out of hell, for it is so often thankless work that threatens to drag you back down with them.” This could not have been said any better. The anthology is not only for horror lovers but also serves as a reminder that addiction can be combated by counseling, meetings and most importantly, love. So dig into Garden of Fiends’ intoxicating contents and become addicted to literature rather than drinks and drugs.