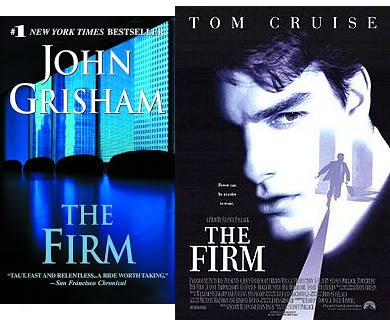 This is probably John Grisham’s most well-known novel but it is also surprisingly not my first reading of his work. I loved reading his other novels namely The Brethren and The Whistler but it was not until my friend Chad A. Clark recommended his earlier work that I decided to give The Firm a try. Another motivation was seeing the book’s 1993 adaptation on the Netflix menu. And I am very grateful for both my friend’s recommendation and my decision to read the book first as it is the superior version.

My only gripe with the source material is that it has a painfully slow start. I know this is a legal thriller but there is so much legal jargon espoused in the starting chapters that I was desperate to see the action start. The novel really picks up when you are 20% into reading it. Then it becomes a rollercoaster of a ride. The best factor was undoubtedly the interesting characters especially Tammy for which Holly Hunter was nominated later on for a Best Supporting Actress Oscar because she embodied this intriguing character so well.

The cinematic adaptation did have a great cast. I could already picture Gene Hackman as Avery Tolar and Ed Harris as Agent Wayne Tarrance before they showed up on the screen. But if you watch the movie right after finishing the novel or vice versa, there was a lot of change to the plot especially after the halfway mark which didn’t improve on the original material at all. Also, I didn’t expect to see horror icon Tobin Bell cast as the menacing Nordic Man but he did a fantastic job.

I reckon that The Firm would’ve been better adapted as a high-budget TV miniseries. Of course I’m sure that during the 90s there was not as much investment in TV shows as of nowadays, but this novel which is quite long needed space to breathe on the screen. The Firm’s almost 2 hours 40 minutes running time just didn’t cut it; making the last half-hour feel very rushed and I was disappointed as the novel’s third act was beyond brilliant.

Again, it could be because of the director. Sydney Pollack gave more of a dramatic flair to a movie promoted as a legal thriller. Perhaps in the hands of a director known for thrillers of this type, like Joel Schumacher, the adaptation might have been almost as amazing as the source material, at least with a better ending, but of course the screenwriters are also to blame.

Overall, I enjoyed the novel but loathed the beginning sections. And I found the film adaptation to be decent yet flawed towards the end. But I still suggest you both read the novel and watch the film as the experiences are quite different yet unforgettable.