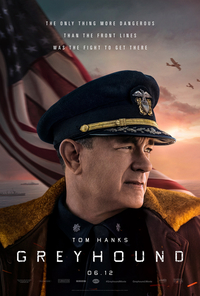 Most recently I have watched 4 war films including this one and the rest were Midway, Indianapolis: Men of Courage and 1912. Midway is extremely bad, one of the worst movies of the 21st century especially given its repetitive screenplay so it’s definitely a 0.5/5. Indianapolis is certainly a 2.5/5 and therefore a time-pass flick.1912 is a 5/5 especially given its unique take on the genre. So, Greyhound (2020) falls somewhere in the middle of these two aforementioned features.

It’s awesome because of its pacing and short running time in a world of 120+ minutes big-budget extravaganzas (it’s only 90 minutes long), and the only proper scenes featuring the enemy are the U-boat’s captain’s taunting of the ship Greyhound via radio transmission (and thus the screentime is not wasted by useless exposition). Tom Hanks also delivered an awesome low-key performance similar to the last time I saw him which was in A Beautiful Day in the Neighborhood (2019). But there was something missing in the screenplay; there was something amateurish about how all the events panned out, and how it probably looked better on paper but couldn’t transmit so well on to the screen. My suspicion was confirmed when I saw Hanks’ sole credit as screenwriter (with a script based on C.S. Forester’s 1955 novel The Good Shepherd), and maybe with a more veteran scriptwriter, the film would’ve been as fresh as the sea instead of dry like the shore.

Overall, if you like war ventures then you’ll undoubtedly love Greyhound, but for lovers of all genres, it might come across as merely satisfying rather than a breathtaking experience. P.S. I swear I first thought the title Greyhound alluded to the grayish cinematography by Shelly Johnson who also did an amazing job as the DOP. Also, this was only director Aaron Schneider’s second flick and he didn’t come across as inexperienced at all given that this was his first foray into blockbuster territory.