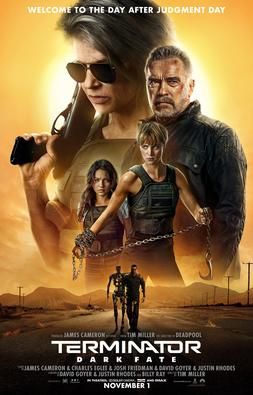 When you decide to watch a lukewarmly received action film, you either get mystified (Gemini Man) or the negative buzz surrounding that movie is reinforced (Rambo: Last Blood). With 2019’s Terminator: Dark Fate, it is more of the former than the latter.

Instead of serving as a reboot like the 2015 Terminator: Genisys which starred big names such as Arnold Schwarzenegger, Jason Clarke, Jai Courtney and Emilia Clarke but still flopped critically and commercially, Dark Fate chooses the sequel path, and if we are to ignore 2003’s Rise of the Machines, then DF takes place approximately twenty-four years after 1991’s Judgment Day.

The screenplay penned by three writers including two big names David S. Goyer (Batman Begins, Man of Steel) and Billy Ray (Gemini Man—no surprise there) and one not so big one namely Justin Rhodes, seems like it could have been concocted by a twelve year old fanboy of the Terminator-verse. I didn’t even want to outline the plot but here goes: Two people are sent to the past. One (Gabriel Luna who is most famous for playing Ghost Rider in Marvel’s Agents of S.H.I.E.LD.) wants to terminate a Mexican woman named Dani Ramos (Natalia Reyes) and the other (Mackenzie Davis) has to protect her. If you think that this narrative is the only homage to Judgment Day, you are mistaken.

There is a long car chase sequence which, though excellently choreographed and it also reminded of the excellent chase in Gemini Man, also serves as a tribute to Terminator 2. There are also other references to Judgment Day such as the utterance of the legendary “I’ll be back” to the Luna-played Rev-9 whose design could not be any more similar to Robert Patrick’s T-1000 in T2.

On top of that, I thought Rambo: Last Blood would be the only movie with Mexico as the primary setting, but besides using a Mexican protagonist for the sake of diversity, this country is also where we are bound to find Linda Hamilton’s Sarah Connor who is wanted in all the fifty States of America.

The initial half-hour is filled with jaw-dropping action scenes. The pacing is so superb that you won’t even have time to digest the introductory storyline. It won’t take many brain cells to know not only what’s going on in the heat of the moment, but it will also be easy as pie to figure out what’s going to happen in the very next scene. Yes, Dark Fate’s fate is not so dark after all.

Arnold Schwarzenegger’s character, T-800, doesn’t make a solid appearance until the first hour has passed, but this is where things started taking an even more comedic turn. The sophomore half of this feature is filled with so much nonsensicalness that I was not surprised that Dark Fate’s director turned out to be Tim Miller who also made 2016’s Deadpool. However, the latter character is meant to be nonsensical whereas Terminator, though also designed to deliver deadpan one-liners, should not be as comedic as a self-aware comic book character. They might as well have added an ability for Dark Fate’s characters to break the fourth wall.

The plot is not only clichéd but ridiculous. It is of course better than the story of Genisys but it is still ridden with numerous plot-holes. The following are the most prominent errors which I noticed in the script: Firstly, why send someone like Mackenzie Davis’ Grace to the past when she isn’t fully equipped to dispose of the Terminator? Secondly, if Legion (the future AI threat to humanity) is so smart then didn’t it send Rev-9 to terminate Dani when she was an infant? Thirdly, if Terminator 2’s final events stopped the onset of Judgment Day then are these time travelers from a different future?—since all the Terminators sent to assassinate Sarah and Jon Connor before this time period were produced by the original arch-villain, Skynet. Fourthly, how does Ramos, who has no military training, suddenly become fearless against an almost unstoppable android in the duration of a 128-minute running time? Fifthly, how does Sarah Connor constantly survive near-death experiences when she isn’t as durable as her two cybernetic allies? The movie never tries to resolve these questions which leads to a brainless storyline encompassed by over-the-top fighting scenes. Moreover, the two major plot twists in the motion-picture can be easily foreseen—even by a viewer who is new to the series. Again, this type of direction-writing suited a film like Deadpool but has turned Terminator: Dark Fate into the Thor: Ragnarok of sci-fi action flicks—and not in a good way.

The saving graces of Dark Fate are its excellent performances by an all-round terrific cast. Linda Hamilton was hands down the best part of DF. She was able to emit the same kind of bad-ass charisma that she brought to Sarah Connor in Judgment Day. Schwarzenegger also proved that he has still got it. Apart from the relevant aging as well as salt-and-pepper hair and beard, Schwarzenegger’s T-800 was mind-blowingly reminiscent of his career-making performance in the 1991 sequel. Newcomers to the series, Reyes, Davis and Luna all played their parts to perfection. I have never seen Davis in a film/show before but I was already aware of Reyes and Luna, and was not at all surprised that Luna made such a terrifying menace given his stellar performance as the anti-hero Ghost Rider.

The second favorable aspect of Dark Fate is its amazing direction and action choreography. If you’ve seen Deadpool, then you won’t be shocked to see high-budgeted CGI combined with top-notch stuntwork courtesy of Miller’s visionary abilities as well as the coordination with his team members. Miller is a VFX artist and Dark Fate’s visuals are as breath-taking as any other modern blockbuster. This is Ken Seng’s debut as the DOP for an entry in the Terminator-verse but he does a marvelous job of showcasing gritty and dark (pun-intended) visuals. Junkie XL’s background score, though out of place sometimes, matched the on-screen happenings, and also allowed for a bit of nostalgia.

I will now give some suggestions on how this venture could’ve fared better. Firstly, there should never have been a new Terminator flick. We’ve gotten an original film, a direct sequel and then a third part (Rise of the Machines), followed by a sequel set in the far future (Salvation), with a 2015 reboot (Genisys) and then a 2019 movie which retcons all the parts released after the original sequel. My recommendation is not only that there should never have been a new third part, but that this script could have been used to kickstart a new universe—along the lines of what Gemini Man aimed to do. Furthermore, due to the disastrous box office returns of DF, I doubt that a sequel/prequel/reboot is coming, and I hope against hope that I am correct in my assessment. Secondly, Miller’s direction is being wasted on long-dead franchises. The last Terminator film to be both monetarily and critically successful was 2003’s Rise of the Machines, but the last Terminator feature to become etched on the hearts  of critics and viewers alike was Judgment Day. It has been twenty-eight years since the release of T2, and even after four sequels, spread out across a wide span of time, have not made the same ever-lasting impact that Judgment Day has. This could be said the same for the original Die Hard. Both Die Hard and Terminator 2 have been considered the finest action pictures of all time by American film critics, but none of their follow-ups have stood the test of time. Thus, the director and writers of Dark Fate should have combined their talents on something new instead of something rehashed time and time again by Hollywood.

To end with, if The Force Awakens is more or less the A New Hope of the 2010s, then Dark Fate is as close as any film could get to being 21st century’s Judgment Day. If you are a hardcore sci-fi action fan, that’s good, and if you’re a Terminator enthusiast, that’s even better, but if you want something more than just another adrenaline fix, then look elsewhere.