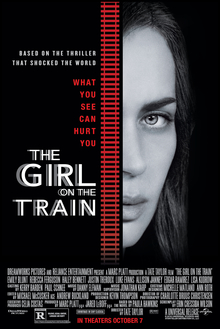 This is a comparison between the film and the book that it’s based on.

Similarities: The movie featured the six main characters who were attractive just like the source material. Showcasing Rachel as a severe alcoholic was also quite like the book. The ending is almost exactly similar.

Differences: In the book, Rachel and Scott Hipwell have an affair but here they don’t. She also finds out Tom’s secret through her own efforts and not through asking his former boss’ wife like depicted in the flick. This was undoubtedly a flaw of the adaptation as it could’ve made for better character development.

Film vs. Novel: I will have to go with the novel on this one. In contrast, Gone Girl’s film was actually superior to its source material. The Girl on the Train’s original medium is above-average, while the movie itself is average. One thing the movie undoubtedly accomplishes is the Oscar-worthy performance by its lead actress Emily Blunt. And the other main women also put on a good show. But the male individuals had no character development at all. The male performers were simply used as eye candy.

The Verdict: The Girl on the Train (movie) is complete time-pass. It’s even more predictable than the novel. Both mediums can only be watched or read when one has nothing else to do.

Furthermore, people comparing this book to Gillian Flynn’s Gone Girl should give it a re-read. Gone Girl was quite original in its depiction of how media can influence investigations. Paula Hawkins’ The Girl on the Train relies on the main character’s limited detective skills in solving a missing person’s case. This book might’ve been a record-setter but it is extremely overrated.