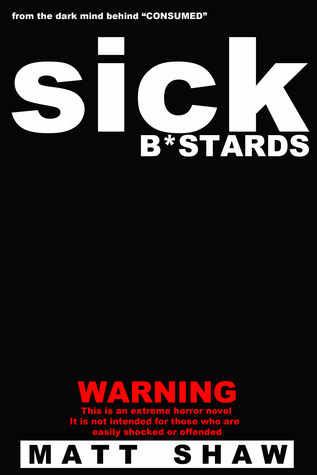 Here’s the synopsis listed on Amazon: A family will do anything to survive after a nuclear attack has left their world in ruins. Actions which even surprise them…

The story’s format is as linear as its aforementioned plot. A family (two parents, a son, and a daughter) wake up with no memory of their pasts besides knowing that a nuclear attack has finished off most of the world.

Just like they say that an essay’s introduction should captivate the reader to read the whole of it; in the same vein, Sick B*stard’s initial four pages got me hooked into reading the remainder of it.

What I admired most about the book was the frequent alteration of time periods. Sometimes, we’re shown events that may or may not have happened in the past, and then periodically we’re reading about what’s occurring in the present. These constant changes allowed the storytelling to remain fresh throughout the 238 pages, and ultimately helped in moving the narrative along at a rapid rate.

What I didn’t favor about the yarn was how it didn’t offer any semblance of variety aside from the writer’s animated illustrations of obscene sex, violence, and gore. Many incidents felt repetitive as if the author couldn’t think of anything new to add to the post-apocalyptic category. Shaw also needs to brush up on his descriptive-writing skills as he could depict cannibalism in an artful way, but couldn’t describe the surroundings, character descriptions, etc., with an equal amount of finesse.