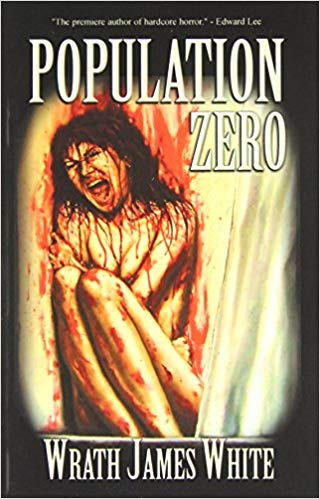 I’ve been aching to read Wrath James White’s work for a long time ever since reading online about his status as one of the 21st century’s leading extreme-horror writers. And I’m glad that I began my journey with his 2010 novella, Population Zero.

Here’s the synopsis listed on Amazon: An intense sadistic tale of how one man will save the world through sterilization. When Todd was just a child, he learned that sometimes it was necessary to sterilize or euthanize animals in order to keep their population from growing too rapidly. It was the humane thing to do, the best thing for the environment. Yet, every day at his job at the Welfare Department, Todd sees the dregs of humanity multiplying unchecked, overburdening the earth with a tidal wave of waste, abuse, and cruelty. But if he can convince them not to reproduce, if he can convince everyone to voluntarily sterilize themselves, then he might just prevent the coming population explosion. And those who can’t be convinced… Population Zero is the story of an environmental activist named Todd Hammerstein who is on a mission to save the planet. In just 50 years the population of the planet is expected to double. But not if Todd can help it. From Wrath James White, the celebrated master of sex and splatter, comes a tale of environmentalism, drugs, and genital mutilation.

The story starts off exceptionally well as the characterization of the protagonist, Todd, is emphasized upon a lot in the opening chapters. Unlike other extreme-horror stories which rely exclusively on blood and gore to move the plot along, here White leaves a lot of space for character development, especially where the main individual is concerned. I reckon that the narrative would’ve been even better if it were a novel, rather than a novella, as there was plenty of content in the book that could’ve been elaborated upon.

The gut-wrenching sequences are also masterfully crafted, and though I’ve read countless other tales of dread, White is undoubtedly a pro when it comes to descriptions of lurid violence. I also admired how the underlying themes of overpopulation, pro-life, pro-choice, etc., were explored in such a broad scope despite the book being only 112 pages long. Population Zero is not only an example of horror literature but also serves as somewhat of a research paper on sociological terms, such as environmentalism and population control, which still affect daily life to this day and age.

Nevertheless, the yarn is not without its demerits. The ending is semi-predictable and there are a few plotholes as well. Also, regardless of how I considered the concept of a group with a mission to sterilize the populace as ingenious, the author was unable to fully utilize this idea to its ultimate potential. Again, I reckon that a longer word-count would’ve rendered this work as a stand-out among similar stories.

In the end, Population Zero is a must-read for horror fans, especially those of the hardcore variety. The finest aspect of PZ is how it doesn’t rely solely on shock factor to tell a story, but actually has a powerful message to deliver. I’ll be sure to check out the rest of Wrath James White’s bibliography if ever get the chance.