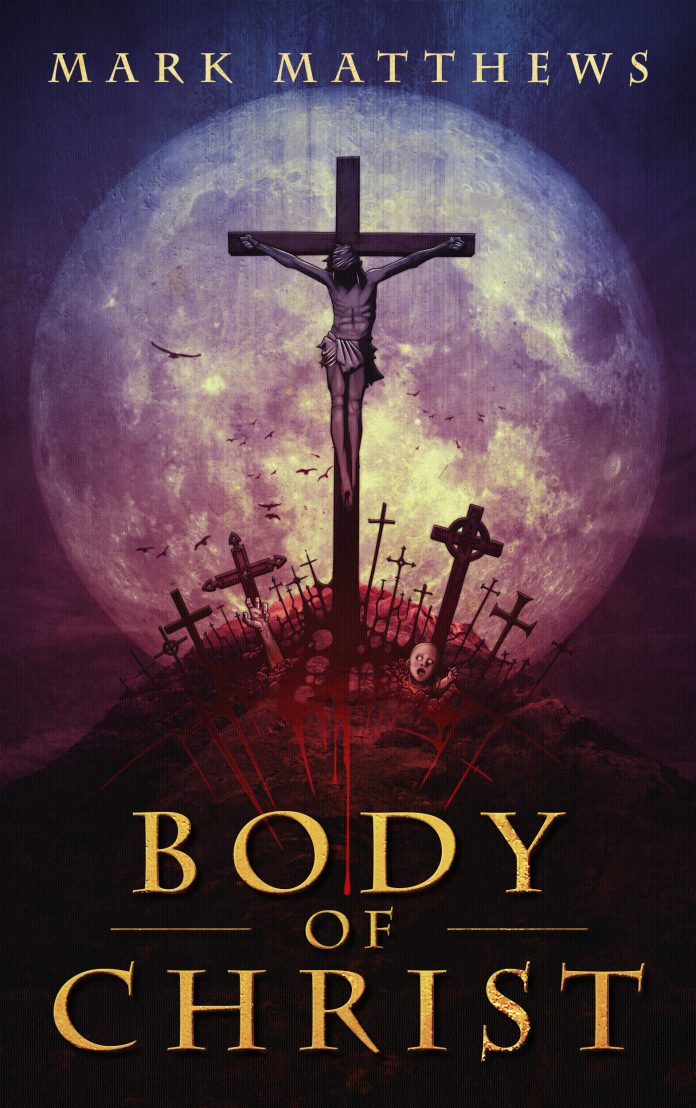 Before starting this review I’d like to applaud Zach McCain for his amazing cover design. They say you shouldn’t judge a book by its cover but the outside of Body of Christ matches perfectly with the insides. 2018 has just started but I doubt I’ll get to see a book cover—especially that of a work in the horror genre—as awesome as this one’s.

Moving on to the review, Mark Matthews introduced me to addiction horror by editing and releasing the anthology Garden of Fiends last year. It was the first book to be reviewed on Literary Retreat and Matthews’ titular tale, Garden of Fiends, was one of the highlights of the collection.

The Plot: A boy named Keagan secretly builds his own Jesus out of communion wafers and the flesh of his dad. A girl named Faith secretly fills the graves in the ‘Cemetery of the Innocents’, a memorial honoring unborn children. On Halloween night, all of them rise.

After I first read the synopsis, I knew that in order to come up with an adequate follow-through of this kind of story, the concentration on creating memorable characters would be a must. Matthews not only capitalized on this factor throughout the 95 pages of the novella—but also did not let the narrative stray too far away from its controversial subject matter—and in doing so, the equilibrium between characterization and dramatization was almost perfectly balanced.

Chapters are divided between the perspectives of the two main individuals: Keagan and Faith. Both are devout Christians and their religion is what brings them together. I liked how the narrative did not tread into romance unlike the majority of Hollywood horror movies that just have to incorporate a relationship in order to become sellable to the public.

What Keagan and Faith have is much greater than friendship and deeper than love; and that’s faith—no pun intended. From the first page, I knew that the author did not intend to keep Faith as a secondary figure, but instead, her character was utilized brilliantly as the female lead.

I also thought that using two major characters was a smart move as only through the eyes of people who have to, voluntarily or involuntarily, deal with religion can we empathize with what they’re going through. Of course, Christianity is at the center of everything in this work of fiction. Matthews doesn’t superficially write about religion neither does he let the power of the plot hide behind fancy symbolism. His direct writing style complements both the pace and length of the story.

Here’s an example illustrating Keagan’s Mom talking to him:

“…But if you say Amen like you believe Jesus is the son of God, that you are eating His flesh, and that you are worthy of salvation, then it’ll taste like a piece of God. It will grow inside you and replace all the bad parts.”

It was the voice of Keagan’s dad, cursing either at politics on the TV or because of the pain in his back, it was hard to tell which.

This is why, Body of Christ, like all worth-reading horror-thrillers, has many pages filled with breathtaking juxtaposition of comedy with seriousness.

I would also like to admit that the yarn did creep me out frequently at times. This has not only to do with the unfortunate events that always encompass Keagan and Faith, but also because of the sequences dealing with menstruation.

Honestly, I did not take Biology in O-Levels, and my curiosity never prompted me to search vastly on this topic, besides looking the word up in the dictionary. Menstruation is used as a literary device here. But instead of benefiting from the shock value of utilizing this womanly trait, Matthews also elaborates on the beauty of it. I doubt that anyone has ever read a more elegant description of a woman having her initial period:

I was lying in the surf, on my back, tasting salt water on my tongue watching the whitecaps roll up my belly, bubble under my chin, and then roll back down, leaving me there to sparkle under the sun. I clutched on to handfuls of sand, once in a while watching a tiny shell creature burrowing for cover. Then I noticed a thin twirl of red between my legs. I wasn’t scared or shocked, just curious, a fortunate witness to something miraculous. I laid there for as long as I could, watching the blood swirl from my bathing suit, and after a while I could hear the heartbeat of the egg: boop-boop, boop-boop, ever so faint, and I knew it was ridiculous, but I could hear it nonetheless. I could sense it when the tiny egg swam away, fueled by the ocean waves pulling it back to sea. The egg was off to join the rest of the living, as if the nutrients of the ocean would care for it and help it grow. This is what happens. As a woman, we give birth to life every month. Our blood is like the ocean water that fuels living things.

This emphasis on things which especially men don’t elaborate on, is part of what you just won’t expect from Body of Christ. I am also tempted to compare many of the themes, such as the attention given to family-related matters, to those exhibited in Matthews’ previous story Garden of Fiends. Matthews is one of the few authors that gets family right. He’s able to showcase both the love and hate between relative as subjectively as possible. Most fiction writers, not necessarily those who scribe in the horror genre, aren’t able to relate to blood ties as fittingly as Matthews.

Here’s another example of how Matthews succeeds in writing about menses:

The above paragraph is about the event that is subsequent to Keagan’s discovery of Faith’s long-kept secret. And it also sums up my analysis on the writer’s excellent handling of a topic that is not usually mentioned in literature—particularly that which I’ve read.

I will certainly get nightmares after I reading the part where the communion-wafer Jesus came to life. I liked the way that karma took care of Keagan’s mother near the concluding pages. The unborn babies coming to life was even more frightening—and now I’ll have to deal with a bit of insomnia during the first quarter of this year. But this disorder will be a double-edged sword for me. I reckon that a good horror story is the one that follows you from nights on end; just like folk tales or campfire stories—the line between reality and fiction becomes blurred when these types of yarns keep spinning around in your head.

I would love to share the paragraphs which depict the most shocking sequences but I’ll leave those to be textually experienced by potential readers. Here’s a part that showcases a new take on communion:

And Captain America gets a piece from Jesus’s palm.

And a zombie gets a piece of Jesus’s forehead.

However, there is one aspect that I think doesn’t favor Body of Christ, and that’s the plot outline of the novella. In my opinion, the synopsis gives much of the twists away. I thought that the back cover should’ve only hinted at the storyline; something like Body of Christ is a wicked take on the catholic sacrament of communion. Or the synopsis could have read: “A boy named Keagan secretly builds his own Jesus out of communion wafers and the flesh of his dad”. Body of Christ might’ve lived up to the cover, but alas, it wasn’t able to do justice to the contents in a more unpredictable way.

Whereas Garden of Fiends allowed me to identify with the terrors of addiction, Body of Christ has introduced me to Christian horror, and I didn’t mind the journey nor the destination. This novella is doubtlessly not for the faint of heart—and no matter how much horror literature you’ve already read—brace yourselves for nightmares after concluding this one.