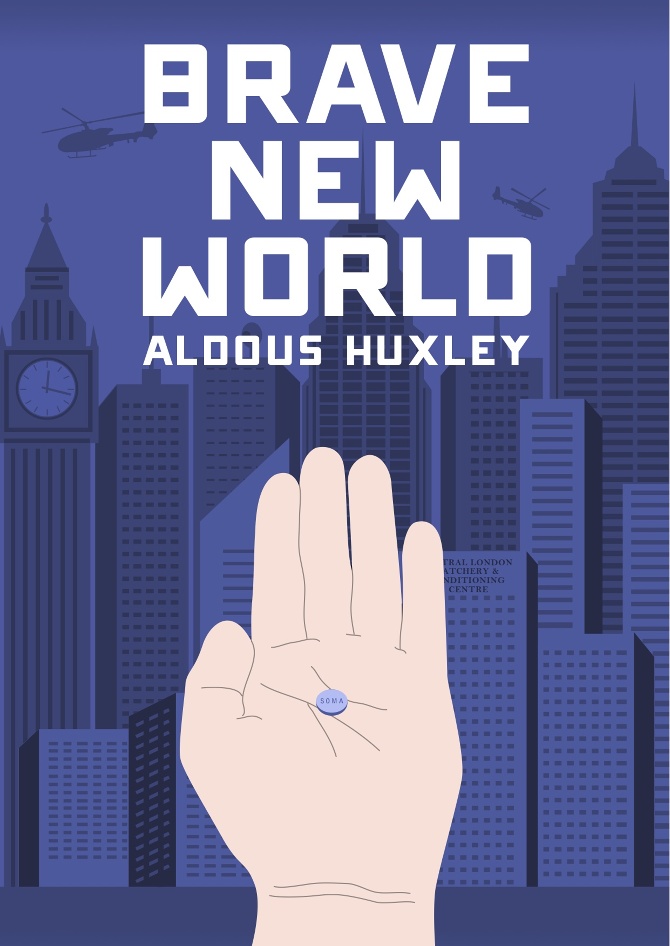 I stumbled upon Brave New World, despite seeing it discussed on multitudinous websites, when I searched for “Books similar to 1984” on Google. The latter novel, written by the unparalleled George Orwell, opened my eyes to what dystopian fiction really is. But Brave New World also taught me a similar, albeit, more applicable lesson.

Brave New World is a science-fiction novel written by Aldous Huxley in 1931 and published in 1932. As you have already noticed by the afore-mentioned dates, it precedes Orwell’s magnum

opus, but I still consider both as separate masterpieces in the same literary world.

Brave New World talks about an era, which can be simplified as AD 2540, where citizens are not only artificially created but are also assigned their roles at birth. This done primarily through psychological conditioning. The classes are: Alphas, Betas, Gammas, Deltas and Epsilons.

The above synopsis did intrigue me as it has most probably led you to an interest in finding out more about the novel yourself. But I have to admit that the opening ten to fifty pages gave me a migraine. I’m a liberal arts student, and though I am aware of the practicalities of science, I didn’t expect the first half to dive into such over-explanation. Later on, I got to comprehend how Huxley was so well versed in doctorial science despite being a literature graduate, as many of his close relatives were working in the medical profession at that period.

The writing style of Huxley did irk me in a way that a minority of British writers that I’ve read always do. The initial half comprised of an imbalance between factual information and literary treatment. At times, it felt that I was often reading a medical journal and not a work of art. The book is 311 pages long but fifty percent of it should be classified as going over the head of people who aren’t thoroughly aware of the practice behind artificial reproduction.

Huxley’s writing also has an air of superiority; there’s a prominent hint of imperialism about it. Again, I’m not deeply aware of Huxley’s thought process during those pre-Partition times, but the book does borrow heavily from the Hindu caste system that was, and probably still is, though at a much lesser extent, prevalent in India. This sense of authority does complement the theme of colonization, nonetheless it is to be noted that the 1931 Depression that occurred in Britain, also had a significant influence on the novel.

The actual comparison to real life, especially that of the 21st century, that Brave New World is known for starts when John the Savage is introduced. I also noticed how this white male who grew up in the only presumed area of backwardness, is frequently referred to as The Savage or Mr. Savage by other characters especially during the third act, despite him evidently being smarter and even better versed in the English language than the other inhabitants of the World State.

The novel really breaks ground when individualism starts to get discussed immensely. From the first page, Brave New World can be seen as not only an allegory on identity, but also as a metaphorical debate between individualism and collectivism. This theme is what actually separates the contemporary entries in dystopian fiction from the must-read ones in this genre. This is also an issue that cannot be properly explored in the 21st century post-apocalyptic works of fiction such as The Hunger Games, The Maze Runner, and The 100. Again, I have not read the afore-mentioned works, but their popularity led to feature film and TV show adaptations. And owing to the hype, I have seen the screen versions of these popular series. But none of the previously referenced works come close to the 20th-century epitomes of post-apocalyptic fiction; i.e., Brave New World and 1984.

Brave New World might provide you with TMI at the onset, but the second and third acts are as close to, what I perceive to be, Huxley’s primarily humanist objective. There were plenty of ways of exhibiting this topic, as it has already been depicted in other celebrated works of 20th century dystopian sci-fi fare, but none are as close to real-life as Brave New World. Not only has it predicted the more cut-off phase of the world which, in my opinion, has emerged in the 21st century owing to advancements in technology as well as in media, but it is one of the rare novels that has stood the test of time by holding relevance to the actual way of life despite a time gap of almost nine decades. And this emphasis on pertinence is the only factor that truly distinguishes Huxley from Orwell.