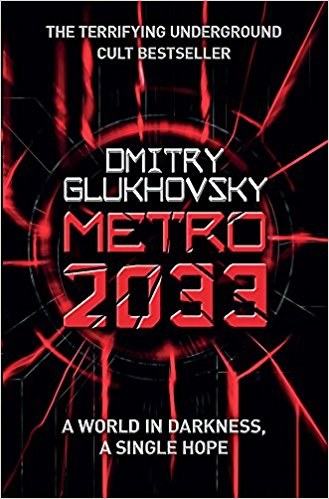 Last December I finished reading and critiquing The Story of Philosophy by Will Durant. It left me with an insatiable thirst for seeking philosophical efforts in other areas such as literature, film, etc. I was fortunate for I found what I was looking for visually in the anime—Fullmetal Alchemist: Brotherhood—that I finished watching last month. It gave me further insight into various theories but I still longed for interpreting another thought-provoking text. My literary craving was eventually fulfilled upon my reading of Metro 2033.

This is a review of the 2010 English edition translated by Natasha Randall. The original author is Dmitry Glukhovsky and this work was initially published in his native Russian language.

Metro 2033 is a post-apocalyptic science-fiction novel about life in the Moscow Metro. After a global nuclear holocaust, the remaining survivors are forced to live underground after the surface world has become inhabitable. We follow Artyom, a 20-year old who is tasked with contacting a man named Melnik about something sinister unfolding within the subterranean system.

I won’t give away too much of the plot as I want potential readers to have a go at the book themselves. I admit that I haven’t indulged in the 21st century age of dystopian fiction where the market has been captured by modern franchises such as The Hunger Games, the Divergent trilogy, The Maze Runner, etc., although I have seen many of their subsequent movie adaptations. Metro 2033 was a refreshing take on this genre as it cuts through the limitations of YA fiction. Still, here we have a young protagonist who meets a lot of people of various age throughout his journey. So, this novel falls somewhere in line between young-adult and adult fiction.

Analysis-wise, I had mixed feelings about the novel. The translation did make it difficult to comprehend some parts, and re-reading certain sequences gave me a headache as I wasn’t able to enjoy the near-perfect pacing that Glukhovsky exhibited throughout the 458 pages of this version. There were many grammatical and spelling errors but they only annoyed me insofar as the flow was concerned.

The best aspects are of course the phenomenal pacing and the consistent thrill factor. In this respect, the author reminded me of James Patterson, as his diction, though not as profound as Glukhovsky’s, is superbly fast-paced. The philosophical parts were amazing, especially the long passages which elaborated on Artyom’s reasoning after any major event had occurred. However, I noticed that in many chapters there was a lack of constancy. For example, one paragraph would be about Artyom’s distinct outlook on life, and in the very next paragraph, there would be a surprise action sequence.

That’s why the chapters should’ve been structured in a more organized way. The narrative is penned in a linear fashion but the randomness of happenings just becomes ludicrous at times. The intended serious moments occurring in the story turn out to be downright laughable, and one reason could be Glukhovsky’s occasional over-the-top descriptions. Nevertheless, I admit that the quality of the plot is outstanding as I got myself immersed in the storyline just after reading the opening chapter.

Furthermore, I admired the writer’s immense knowledge of history and philosophy and how he masterfully included so many cultures, traditions, ideologies and religions into a single volume. There were many philosophies therein but these, in my opinion, and in no particular order, were the ones most expanded upon by the novelist: Nihilism, Existentialism, Communism, Fascism, Capitalism, Anarchism and Marxism.

The primarily plotline was also fantastic. Just when it seemed that some incidents were going to come across as clichéd, a shocking revelation took its place. The novel’s ending was also unforeseeable and simply breath-taking. And it’s safe to say that it left me wanting to read more of the author’s bibliography. I particularly liked the sections which involved The Great Worm.

Nonetheless, the novel’s length was an issue for me. At 458 pages, and me being a first-time reader of his work, I’d like to suggest that Metro 2033 would’ve been superior as a novella. Oftentimes, I felt that this was a PhD-level thesis, where certain sections would repeatedly have to be taken apart in order to construe them at an academic level.

Moreover, Metro 2033 is the only the foremost entry of a trilogy which also includes Metro 2034 and Metro 2035. But after binge-reading so many chapters, of which many weren’t even arranged systematically, it further proves my point that there was too much information. The minimalist approach of less is more should’ve been applied in regards to the writing of this publication.

To end with, I give Dmitry Glukhovsky credit for not only incorporating such a vast diversity of concepts in his debut—but also for introducing me to Russian literature—and instead of starting off my journey with the Eurasian classics, I began it with a novel that will fall into this category within a matter of time.