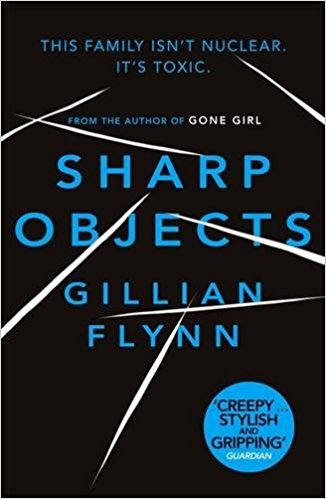 After the massive success of the Gone Girl(2012)’s cinematic adaptation, Gillian Flynn’s second novel was also made into a movie starring Charlize Theron, yet was both a critical and commercial failure. It was a shame as I consider the source material, Dark Places (2009), as her best work yet. So, I’m glad that Sharp Objects (2006) is coming to the small screen in 2018 via HBO starring Amy Adams and Patricia Clarkson. I consider Gillian Flynn to be the paramount thriller author of the 21st century and my favorite female wordsmith of all time.

I became a fan of hers after watching 2014’s Gone Girl. I subsequently read the book it’s based on (I usually read the book first) which I miraculously found untouched on my sister’s bookshelf. How she passed on this gem came as no surprise. The two main characters could not be creepier and only those readers who can survive being hypnotized through Flynn’s twisted narratives can go through one of her stories.

I read Dark Places afterwards and it was even better. Then I finally got the chance to read her standalone short-story (also featured in an anthology prior to this release) The Grownup (2015). It remains the best short-story I’ve ever come across.

Even though her second novel’s title contains the word dark, this word can used to embody her complete bibliography. Not only is the theme dark but the settings and especially the characters are the epitome of gloomy. I’ve never completed any of her writings and then envisioned a light at the end of the tunnel. I don’t know whether Flynn is an optimist at heart but her writing style is so nihilistic it would’ve made Nietzsche proud.

Sharp Objects is her initial paperback and the overcompensated subplots reminded me of that repeatedly. Don’t get me wrong—there’s nothing wrong with minor storylines within a major plot, especially in regards to the thriller genre, but sometimes it seemed as if the author just wanted her story to reach novel-length.

The plot concerns Camille Preaker who is a young journalist in Chicago. She has suffered from two major events in her life: the death of her younger sister and causing bodily harm to herself. It seems the worst is behind her until she is sent on a job assignment to her old town—Wind Gap. There she has to get to the bottom of not one but two murders with both the victims being young girls. This also leads her to reuniting with her estranged family and also having an affair with an out-of-town detective.

Sharp Objects is more similar to Dark Places than Gone Girl. Firstly, Sharp Objects has a protagonist who is not glamorous or rich just like the major figure in Dark Places. She is also unconfident and not the best person to get relationship advice from. Again, this female individual is again seen in The Grownup, though that character is the lowest of them. Gone Girl is as unique as the titular character, Amy Dunne, who could not be any richer or more popular. She is the talk of the town whereas all the other protagonists of Flynn’s books were down-to-earth, lower to middle-class women. And that’s also why we might not have foreseen the events of the second-half of Gone Girl.

But Sharp Objects is sometimes just too predictable. There are the characters who you’d just expect to get introduced to. There are Camille’s Mom’s rich female friends who you know will be the primary sources of gossip for our newbie journalist. There’s the attractive yet maybe serial killer who no town girl can get enough of. The clichéd characterizations could also be the reason why events unfold more like an 80s B-movie than an original whodunit.

But what separates Sharp Objects from the rest of the pack is the main character’s emotions. Not once does Flynn let our attention divert from Camille and what she is going through. Her emotional state is not only expertly described but also justified. Whether we’re being shown her past or her present, it’s clear that no one would want to trade places with her.

I would also say that this book is more suited to female readers as most of the issues mentioned here are women-orientated. The treatment of daughters by a needy mother is so strongly depicted in the text that only a woman who has gone through something similar can relate. And it is sure to make the strongest of hearts, especially mothers, tremble while flipping the pages.

What was not at all predictable was the conclusion. You’d have a hard time guessing what was the motivation behind the murders. This is where Flynn excels at—giving us an ending we could never forget. That is why you might feel you’ve read a lot of the content before in another book. And when you reach the final lines you’ll realize that that’s how Flynn always manages to deceive you.

I recommend this novel to Flynn enthusiasts and thriller lovers alike. Veteran mystery readers like myself would not find this a remarkable story. I also declare Sharp Objects as Flynn’s most inferior work. And if you are new to Flynn then read her other entries and save this one for last.