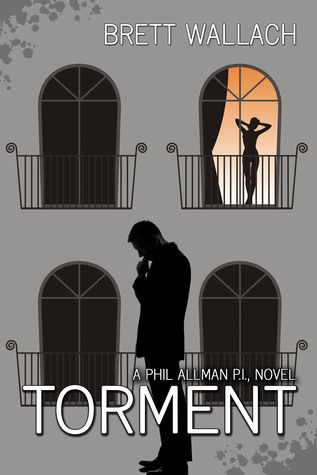 This is the first Philip Allman PI novel that I’ve read. From the get-go, it’s fast paced and the writing is as in-your-face as it can get. Brett Wallach’s writing style reminded me of Raymond Chandler’s (though I’ve only read one of the latter’s tales: Red Wind).

The plot follows private detective Philip Allman’s investigation into his ex-wife, Marci Downes’, murder. To a potential reader, the aforementioned description might make the work come across as clichéd. But with polished character development, cleverly-crafted dialogues, and an ever tension-building narrative, Torment is not just another detective novel.

What I liked most was the makeup of our protagonist. He breaks the fourth wall many times in the story and this was an aspect that I haven’t encountered before in a piece of literature. The supporting individuals are also creatively-designed such as Dan Lee (an Asian American who struggles to speak American English),the snooty lawyer Norm Simon (who is undoubtedly inspired by Jonnie Cochran, and ironically Cochran’s mentioned in the book itself), the naughty English professor Lee Cohen, and others. This story is more character-orientated than drama-driven, although there is no shortage of drama in it.

What was most refreshing about Torment was its hardboiled take on the detective genre. Due to the modernity of the 21st century, a majority of the latest entries in crime fiction are relying on technology to move their plots forward. But not here as there’s a lot of old-school beat-’em-ups, classic investigative techniques, offensive verbal exchanges, etc. As I mentioned before, Wallach’s mode of expression will lead you to reminiscing the golden days of crime fiction where the respective tales featured antiheroic sleuths.

However, this yarn is not without its flaws. The whodunit factor is ultra-predictable as I found out the identity of the killer before the narrative reached its midpoint. Also, Philip Allman’s first-person perspective got on my nerves a lot as he seemed to constantly repeat his thoughts until the point that his reasoning became tedious to read about. There were also some plotholes but the overall quality of the storytelling outweighed its demerits.

All in all, Torment is a must-read for thriller enthusiasts, though it might not please fans of other genres due to its by-the-numbers structure. I’m looking forward to reading other installments in this series.

The Return of Sherlock Holmes by Sir Arthur Conan Doyle –...