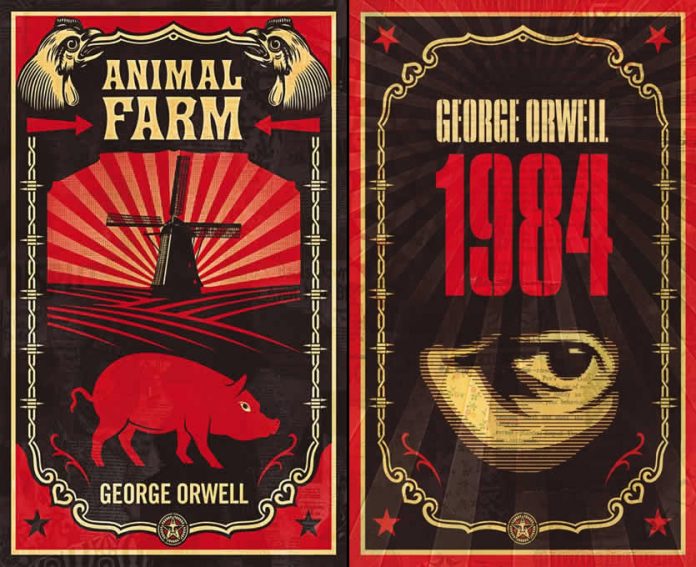 Instead of writing a comprehensive analysis between the two must-reads, I’ve decided to write a short comparison of them.

I first read 1984 in the Spring of 2017. I borrowed it from a lecturer at my university; but I didn’t know what I was getting myself into. It ended up becoming one of the best novels I’ve ever read (the total number of novels I’ve read have accumulated into just about a hundred right now).

Before reading 1984, I had already watched a multitude of dystopian film-series: The Hunger Games, The Maze Runner, etc. These did not at all have the impact on me which 1984 immediately had after my being halfway through it. I couldn’t sleep for weeks after completing it and it kept haunting in me in both my dreams and in real life—which is a positive attribute for any art form that I am able to access. Indeed, I would’ve written an article on dystopian fiction after reading 1984, but I was never given an opportunity to read the books these afore-mentioned movies were based upon. So, maybe I’ll write a contrasting article later on when I get the chance.

After I handed back the book to the lecturer, he specifically told me to start reading Animal Farm. The problem was that this was my final semester and I was already suffering from the procrastination that came with my thesis-report deadlines.

Last week, I had finally gotten my hands on the paperback version of Animal Farm. I was hooked by the first page. I admit it took me quite a while to obtain a literary lust for 1984, yet the latter was written as a novel and they usually have a slow build-up, whereas Animal Farm was a novella.

Correlating  Animal Farm and 1984 is a bit complicated as their genres don’t fully match. However, both are uber-unique examples of literature penned in the English language. The two works share distinguishing variations of political undertones and I was left shaken after finishing both of them individually.

Still, I found Animal Farm a tad more authentic than 1984. This is because I have never read about animal characters having been used in such an authentic way. This was furthered by how brilliantly Orwell expanded upon their personality traits in the tale. I have heard by word-of-mouth that there are some novels similar to 1984 that had also been published earlier (Brave New World by Aldous Huxley comes to mind). I haven’t read these predated dystopian novels but by reading the plot descriptions you’ll see that 1984 wasn’t the first of its kind in relation to its primary plot.

Furthermore, there aren’t many novellas or novels as spectacular as Animal Farm. Other books might share some features such as the major figures being anthropomorphic—but Animal Farm is yet to be almost fully compared to any other work that has been released up till now (the novella was originally published in 1945). Comparatively, 1984 was published in 1949, just a few years later, and the two books also share shock value; at present the worldwide responses from literary critics, and even from general readers, have been ultimately categorized as mixed.

To end with, I rate Animal Farm just 0.5 higher than 1984. I will always recommend both these books to potential readers of George Orwell; never substituting one for another just because of my own comparative article or someone else’s. You might just end up counting these works as your favorite pieces of fiction; they have already taken permanent spots on both my digital and tangible bookshelves.