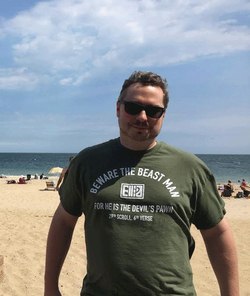 Q1. Matthew, it’s wonderful to have you with us for this Q&A. Please tell us about your humble beginnings as an author.

I caught the writing bug fairly early. I was obsessed with stories for as long as I can remember. I loved movies and when teachers would read stories, I would sit around adults and listen to the stories they told to each other. I started making up my own pretty early. When I was maybe 11 or 12, I got an idea in my head that I desperately wanted to put down on paper. Thirty years later, some of that idea is still in the bedrock of what I write.

The most obvious inspirations for me have been Robert E. Howard, Edgar Rice Burroughs, and Larry Niven. Howard’s words are like fire. There’s so much action and passion carried between the letters. It’s why Frank Frazetta was such a great choice to paint scenes from Howard’s work. Frazetta did with paint what Howard did with words. Edgar Rice Burroughs never let anything get in the way of a good story. Larry Niven was one of the first writers to blow my mind and make me question my sense of scale and proportion. Perhaps less obvious inspirations would be C.L. Moore. She told tales as mysterious and otherworldly as Lovecraft, but was aware that human sexuality existed. An early spark for my creativity was Madeleine L’Engle, who exploded my mind in a similar way to what Niven would do a few years later.

I don’t want to sound glib or patronizing, but my key piece of advice is write for yourself. Write because it’s what you want to do, because it’s what you have to do, and because you love it. Be open with it. Trust others to read it. Trust what they have to say about it. Be ready for that to hurt, because it will. It will also make you a better writer. Of course, you also need to read. Read voraciously and read widely. Don’t simply read in the same genre in which you write. If you write Romance, read some Science Fiction. If you write Mystery, read some History. If you write Fantasy, read some Science. It will make you a better writer (and possibly a better person.)

I’m a movie buff. No matter the era, the genre, or the country of origin, I love film and it’s a huge inspiration to me as a writer. I’m also a lapsed Tabletop Role-Player who has finally gotten back into the hobby this past year. In the last few years, I’ve developed something of a passion for travel, having always dreamed of it but never having done much. I’ve been to Europe, North Africa, and the Caribbean so far and I’ll be hitting South America in a few months.

I’m currently at work on a novel set in my Conquest of the Sphere setting. It’s about a voyage of exploration that will result in a world-shaking discovery, and features Baal, one of my favorite characters to write about. I’m also writing a serialized story in the same setting, which has been a fun experiment and may become a book when it’s finished. After that, I hope to write a multi-generation Weird-Fiction/Horror story set in the Shenandoah Valley and stretching from the 1600s to the 1940s (and maybe beyond).