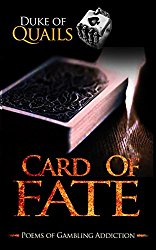 Card of Fate: Poems of a Gambling Addiction (2016) is the sophomore poetry book by The Duke of Quails. And by no means is this an inferior effort than the last one. Duke follows the same structure of Secret of True Love by incorporating at least eleven poems in three segments which are preceded by an introduction and followed by a conclusion.

Both the intro and ending note showcase Duke confessing he’s not a psychiatrist, but just a simple poet, and his modesty reveals the true essence of an artist: One who does what he does for art’s sake. Duke is a poet and his goal is to tell readers the light and dark sides of humanity through rhymes. This he does exceptionally well in Card of Fate.

As the title suggests, majority of the poems included here follow the theme of betting. It’s an addiction that can be as strong as tobacco smoking and alcohol drinking. All the poems included in this compilation differ vastly from one another, making this a truly versatile text from onset to the last page.

It was quite difficult to pick favorites but I found People Are Stupid and I Need Internet from the closing poetry division the strongest in terms of literary value. Here are some outstanding lines from the former:

Silently walking in to steal a chip

Some take showers, and some are knocked out to rest.

After I collected, after I had a good run

I can’t just leave and get something to eat

I have to go to the tables and have some fun.

If I could win more, why stop at the store?

I can be rich and famous instead of living poor.

Judging by the above verses, the author sure knows what leads to a staking habit: The desire to be rich and famous instead of living poor. Here are some verses from the latter:

I’ll pay triple the bill or even double it up

Give me a chance to win more than a buck.

I see I’m talking to a wall

So put someone else on the phone

I’m going to get this internet on

Take back my money and win some more until I have it all.

So, this poem was quite out of the norm due to the inclusion of the need for internet in order to continue gambling. The title of the poem made it sound a bit childish but after you finish reading you’ll realize how sophisticated the work really is. This is true for all the other poems as well. The names aren’t that impressive but what they contain are stanzas of supreme quality. It’s safe to say you should never judge a poem but its title.

Finally, I recommend this book to lovers of all kinds of poetry, and also those who are going through this dependence. It’s not a self-help manual but for some cravings all you need is art to save your soul. The only flaw I could detect in Card of Fate was the length as I prefer shorter books of poetry. But it still makes for a fantastic read and the layout was also excellent.

Secret of True Love: Poems from the Heart (2015) by The Duke of Quails – Book Review