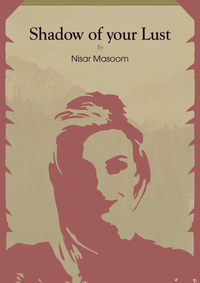 The 1st poem is the eponymous Shadow of your Lust which details freedom of Afghani women. It’s about women who want to be free in a backward society. Nisar Masoom, the author, captures this wonderfully. Set in the backdrop of Afghanistan, Nisar’s verses have a beautiful finesse to them which sets you free while reading.

The 2nd poem is Neck: Part 1 which is followed by Neck: Part 2. Here’s an excerpt from Part 1:

“I want to run my fingers down your slender nape

And then dig them inside

And then skin it until it’s ripe”

You can see from the afore-mentioned lines that this poem is loaded with animalistic sexuality. And that’s great as the entire collection is versatile. You won’t find any poem similar to another one. Here’s an excerpt from the 4th poem High Heels over Heart:

“The blood glistens from the glow

From the hidden meaning of an attraction so longed

That is left as a smudge to be ridden”

The 5th inclusion is definitely one of my favorites. It’s called Persian Beauty and the verses are as follows:

“The curves of your hourglass figure

The nerves of my body hinder

At the sight of your Beauty”

This really turned me on, though I’m not of Iranian ethnicity, yet it reminded me of stunning actresses of that descent like Nazanin Boniadi and Sarah Shahi. Persian Beauty is followed by Rape and Emotional Rape. The former is about a person committing such an act, and the latter is about someone being emotionally violated.

Then we have Slender, Vanilla and Warmth. I was a bit disappointed that they didn’t follow the hardcore nature of Saliva but all of them are extremely well-penned. Here are some lines I liked from Warmth:

“Stay with me on this bed

From dusk till dawn

I would rather be caught dead

The entire poem is quite straightforward and it’s literally in your face. Paris Hilton, the 12th inclusion, is named after the heiress of the same name. It comprehensively depicts the fondness of Ms. Hilton as the author pours down all of his fantastical yearnings of having intercourse with the celebrity. It’s one of the best entries in this collection.

Number 13, Goodnight but not Goodbye, is the most romantic of these odes, and if your heart is not warmed by its verses, then it’s frozen indeed. My Mistress, 14th on the list, is about a man declaring his nights spent unfaithfully with another woman, and hoping that his wife won’t find out about the affair. It’s quite short in length but the impact is colossal. I’ve never read a poem on unfaithfulness and thus the subject matter is quite unique as are the wordings of this sensational piece.

Chocolate is the 15th entry and it compares the devour of chocolate to making love. You can visualize this metaphor by the following verses:

“My love wishes to melt inside your mouth

No longer will we be apart

We cannot be separated not even by fate”

Next we have Goddess of Sex, and yes, this poem is as sexy as the title implies. Here’s a sample:

Show me the distinction between hell and heaven

17th is The Narcissist which details a person in love with the eponymous character. It is followed by With My Bare Hands which takes choking your soulmate to a whole new level. It’s the most sadomasochist poem in this sensual selection and will leave you gasping for more, no pun intended.

The Girl Who Cried Love is quite minimalistic in its approach. Yet it satisfies every inch of craving one can have for a gorgeous girl. These were my favorite lines:

And I shall lend my dreams

By surprise your smile caught me

Last but not the least we have The Insatiable. As the name suggests, it’s about the cravings of a nymphomaniac. Nisar Masoom has created a perfect world in which all his rhymes reflect the innermost needs of a lady who cannot be satisfied. I couldn’t pick a specific part of the poem that I liked the most as every single line was awesome.

To end with, Shadow of your Lust doesn’t have follow a consistent theme, but that’s what makes the work such a must-read. If you want to read poetry that gratifies all of your carnal desires, then you can’t do any better than this.

You can purchase a copy here.

Card of Fate: Poems of a Gambling Addiction (2016) by The Duke of Quails – Book Review

Secret of True Love: Poems from the Heart (2015) by The Duke of Quails – Book Review