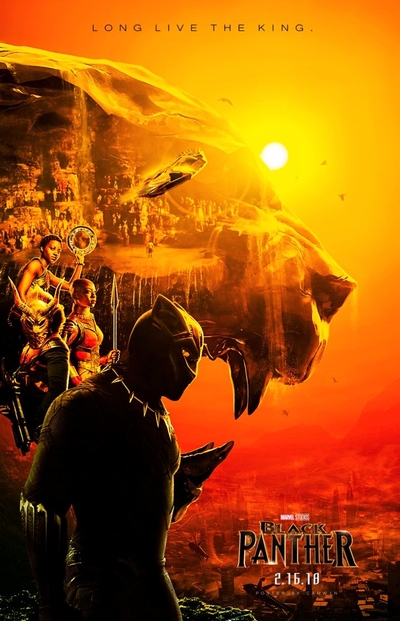 Note: Black Panther poster used in this article is credited to CAMW1N. Check out his DeviantArt profile here.

Black Panther (2018) is not only hyped as the first black superhero movie filmed by a African-American director, Ryan Coogler (Fruitvale Station, Creed), but also for preceding the upcoming Avengers: Infinity War (May 2018).

To start with, it came as no surprise that the visuals were stunning. I don’t know why but I felt that on the surface the film was a mix between The Lion King and Horizon Zero Dawn. Although, the former is an animated venture and the latter is a videogame, there was something about how the mountainous exteriors looked that made me reminisce about those two classics.

But I was not as interested in the visuals as Marvel, and of course, Disney (Star Wars: The Last Jedi), have earned enough revenue to contribute to a more than sufficient budget for their live-action flicks. I would say that I liked The Last Jedi’s CGI better than BP’s, but again it does well to remember that TLJ is a Star Wars entry. Nevertheless, Wakanda is a fictional nation that you’ll not only never be able to forget, but will constantly wish was a real country.

The casting was brilliant and I saw a lot of familiar faces owing to my watching a lot of American media over the years. You see high-profile Hollywood stars such as Forest Whitaker, Martin Freeman, Andy Serkis, etc. alongside TV veterans Danai Gurira, Letitia Wright, Sterling K. Brown, etc., and the new generation of rising stars: Chadwick Boseman (Black Panther) and Michael B. Jordan (Killmonger) in the lead.

Despite everyone playing their roles to perfection, Michael B. Jordan has simply outdone himself. I liked him in Creed (2015) but I absolutely loved his enactment of the main antagonist here. I think there’s also the fact that his patriotic personality suited the role a lot, but I can’t see any other relatively young actor playing the part better than he did.

Black Panther’s running time is just over two hours. But the first hour is heavily clichéd and predictable. I would say that, if you’ve seen at least three Marvel movies in the past, BP’s climax would most probably never come across as shocking. The storyline was executed well, and its pro-black theme accurately reflected the globalization that has encompassed the world in this day and age. But the screenplay written by Ryan Coogler and Joe Robert Cole—executive producer of The People v. O.J. Simpson, and it showed—can’t show us something we haven’t seen before, especially in regards to being a Marvel Comics adaptation. I thought that Wonder Woman (2017) was a superior spectacle, and it can also be compared to Black Panther on the basis that WW was the first super-heroine motion-picture directed by a female filmmaker (Patty Jenkins).

Overall, before watching Black Panther I was more excited for Infinity War Part 1, and now more than fatally optimistic that if Marvel can make excellent movies featuring characters in the lead that otherwise might never sell film-wise; e.g., Guardians of the Galaxy and Ant-Man, and also their latest release that marks the first time an African-American director has helmed a superhero blockbuster. So, with the Russo Brothers handling Avengers: Infinity War, all bets are off!