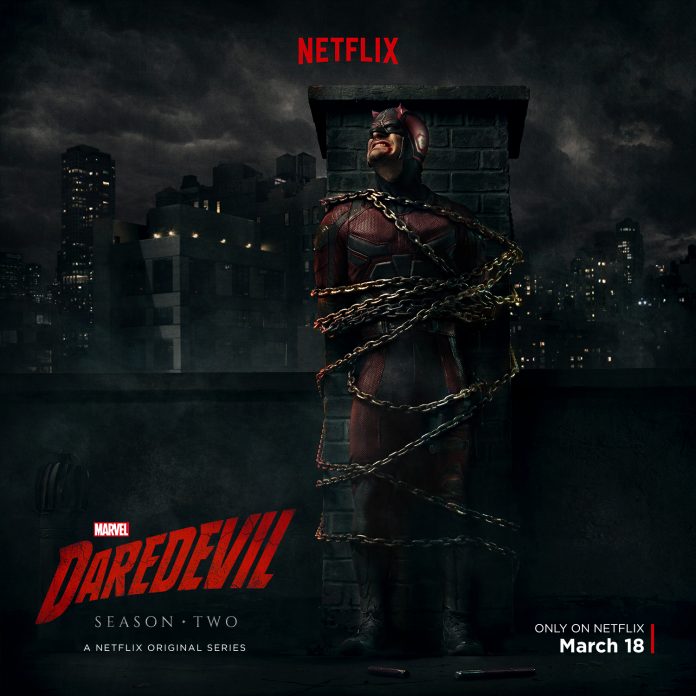 It’s almost impossible to find errors in Daredevil’s second season. By far it’s the best venture I’ve ever glued my eyes to the screen for. Let me elaborate further on into this review which contains spoilers:

The Plot: After putting Fisk behind bars, the Devil from Hell’s Kitchen must face a new nemesis whose title is The Punisher, and also cross paths with an old flame.

The Good: Firstly, the action! It is incomparable to even that used in the high-budgeted MCU movies. No episode was short on adrenaline yet was fueled to the top. From the first chapter we see Daredevil in a chase scene. In season one’s pilot Daredevil had an amateurish suit and average fighting style. Here, he is feared like the Bat from Gotham, as he prowls the streets of Hell’s Kitchen with breath-taking costume design which pays homage to the source material.

Kudos to choreographer Philip J. Silvera who was on the helm on the stunts in this show. As well as using his finesse in flicks such as American Sniper (2014), Deadpool (2016) and many others of the action genre. To end with, Daredevil s2 has excellent fighting scenes which overshadow all other shows of its type.

Moving on, we have Charlie Cox reprising his titular role as lawyer-by-day Matt Murdock and crimefighter-by-night Daredevil. And he plays both personas with acumen. Elden Henson returns as his law-partner Foggy Nelson. I thought he was underrated in this season. I loved the individual’s highlights when he confronts gangsters in the hospital. Or when he gave the opening statement in the courtroom.

Furthermore, I relished the trial scenes as we got to know how Daredevil works when he’s not wearing red. Deborah Ann Woll who plays Karen Page was over-the-top annoying. I’m not sure whether I dislike the actress or her depiction. Nevertheless, Vondie Curtis-Hall’s Ben Urich was a much superior enactment and I just wish that Karen was killed instead of him in the previous outing.

Vincent D’Onofrio’s Wilson Fisk also returns for some episodes. Now, the two unparalleled additions to the cast were: Jon Bernthal as The Punisher, and Elodie Yung as Elektra.

These characters play an even greater role than Daredevil in deciding the fate of Hell’s Kitchen. To be precise, The Punisher is a vigilante out for justice against all criminal parties involved in the massacre of his family. Unlike Daredevil, he carries a shoot-to-kill policy. One of the finest sequences in the show was when The Punisher chained Daredevil to a chimney and gave him the offer of either shooting the vigilante or allowing him to kill an unarmed mobster.

The first four episodes are all about Daredevil v The Punisher. And rightfully so because so many serials wait to unmask the villain. The Punisher introduces himself unmasked and with machine guns to boast. Bernthal embodies this figure as if he were born to play the part. Although, I’m not surprised as I loved him in The Walking Dead and Snitch (2013). He’s finally got the recognition he deserved. And The Punisher’s bloodshed in the prison was an iconic piece of choreography. S2’s writing comes into play with the verbal exchanges between these two individuals. The Punisher’s line to Daredevil: “You’re just a half-measure”, sums up his feelings towards the hero. That he only puts them in jail and doesn’t do a permanent job. The writing is so great that we are left with two choices of our own: Either support Daredevil’s no killing policy, or favor The Punisher’s all-out-war; the punishment he delivers does match the crime after all.

Elodie Yung was seductively brilliant as Murdock’s romantic blast from the past, Elektra Natchios. Here, the usage of flashbacks from the creative team are utilized accurately for us to get a sense of what made them to break up. Elektra also has a shoot-to-kill policy which she breaks from temporarily as she knows only then will her old boyfriend help her in going head-to-toe with her enemies.

I think her character was awesome due to the mystery of it all. Murdock was infatuated with her due to her understanding of his complexities. And it came as a minor disappointment that she was ordered by his own mentor Stick (Scott Glenn) to keep an eye on him. But the revelation is that when Murdock finds this out she confesses her unconditional love for him. Congrats to Marvel for incorporating a worthy tale of romance in an atmosphere of darkness. And not just some nonsense love story but one with characters who actually share characteristics and complement one another. Simply beautiful. What was even more uncanny was that Cox and Yung do spark with on-screen chemistry. Something which is always amiss with Murdock and Page.

I also liked the return of Stick. He’s one veteran blind bad-ass and the couple are never sure what to do with him. Rosario Dawson makes a comeback as nurse Claire Temple who always finds herself aiding anti-heroes.

The Ninjas of The Hand had some of the paramount fighting sequences against Daredevil, Elektra and Stick. They were actually more authentic-looking than anything Asian cinema has ever released. Whether it be jumping on rooftops, sword fighting or plain ass-kicking, these Ninjas are not to be trifled with. I found the scene where Stick whispers to Daredevil to detect their breath while in combat was a stunner. No wonder that guy was able to train him to become the Devil of Hell’s Kitchen.

The finale was better than the last one. S1 ended with an abrupt match between Daredevil and Kingpin. Although, the closure was directed and written superbly. In s2’s finisher we find The Punisher sniping to help Daredevil confront the Ninjas and their leader: The martial-arts master Nobu (who has seemingly returned from the dead) played expertly by Peter Shinkoda. The conclusion was just like the previous chapters in this season: Filled with adrenaline-pumping action. Therefore, the entire season is superior to s1 by not giving any chance for viewers to catch their breath while binge-watching. And boy, this was the finest binge-watching I’ve done in my lifetime.

The Bad: There are only a minority of small flaws: 1. Season one had a more dramatic storyline. Still, s2 makes up for it with memorable discourses between Daredevil and The Punisher. 2. Season one also had a better scoundrel with Fisk yet The Punisher and Elektra are the best additional characters a comic-book based show could ask for. 3. Karen Page is an annoying figure and should be killed in the next season. But I think that’s wishful thinking. Additionally, I found Murdock revealing himself as Daredevil in the end as useless, when he’s been protecting her throughout two seasons! Doesn’t he know that she’ll mess up his moonlighting with her investigative journalism? Men will be men.

The Verdict: Daredevil’s sophomore attempt is not only close to impeccable but is perfection in the highest form of the arts. Sure, it has more action than drama, but its choreography is so sublime you’ll be focusing more on that than the various plotlines. Bernthal’s The Punisher is the best character on the show overshadowing both Daredevil and Elektra for this round.