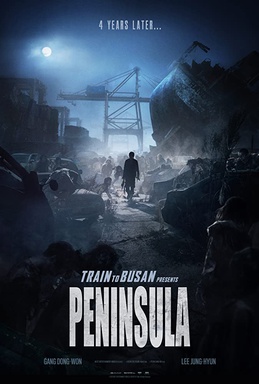 Train to Busan (2016) can be easily considered as a master class on how to direct a zombie film. But its sequel Peninsula (2020) can be stated as the opposite. This sophomore effort is similar to those straight-to-DVD sequels of better known high budget blockbusters although Peninsula’s budget of $16 million cannot be considered as low.

Where the first film had a thrill factor present throughout the running time, and a lot of emotional depth, with an excellent ending – Peninsula replaces suspense with high-octane and mostly over-the-top action, features an utter lack of character development, and ends with a prolonged and even laughable conclusion.

The screenplay is so absurd that I cannot picture a sensible audience member finding themselves emotionally invested in the narrative or the individuals. The story is super predictable especially for a flick of this type. Even though the direction (by the same director, Yeon Sang-ho, mind you) is still good where it has to be – the writing by him and Park-Joo Suk is lacking in many places. Green screens are over-used making the movie appear more artificial than it has to be despite of the excellent cinematography.

To end with, Peninsula works better if you consider it as a stand-alone feature with no relation to the original. It mostly suffers due to its stale script which is as wooden as its characters. The only reason people would watch it is undoubtedly due to its association with the Train to Busan brand name. But just like any failed horror sequel it cannot deliver to audiences what its predecessor had. And that is to present an unforgettable zombie survival experience.

Ironically, this movie might have fared better if it had been labeled as a horror comedy from the onset, because I just could not take 90% of it seriously.