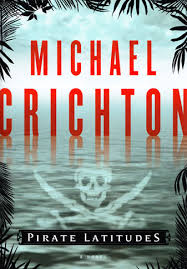 Having read two of Michael Crichton’s novels prior to this one, namely Timeline and The Terminal Man, I was no stranger to his preference for penning in the sci-fi action genre. The Jurassic Park writer chose to set this story in the 17th century, and the background research of this book almost made me convinced that it was based on fact rather than fiction.

There is no doubt this work was compared to the movie franchise Pirates of the Caribbean and the TV series Black Sails. Yet Crichton’s work was like a mixture of the two combining both humor and seriousness throughout the 312 pages. It also worth mentioning that Black Sails debuted in 2014 whereas the novel was published in 2009. So, I could reckon that the series had been influenced by the book, but I cannot ascertain this as I’ve never watched the show—though season one’s trailer does seem inspired by Pirate Latitudes.

Now, let’s look at the plot. Pirate Latitudes is set in the 17th century specifically the year of 1665. The primary location is Jamaica in South America when it was ruled by England. Majority of the population of the Jamaica-based population is filled with drunkards and pirates—though piracy is a treason punishable by death—so the English pirates are given the inoffensive title of privateer.

The Governor of Jamaica, Sir James Almont, hires Captain Charles Hunter to man a ship to the island fortress of Matanceros. This is due to a galleon anchored in the clutches of the structure, having reported to contain an abundance of treasure. The governor’s decision is disliked by his newly-appointed secretary Mr. Hacklett who’s a boy scout. Despite Hacklett’s  disapproval, Hunter signs a contract presented to him by the governor, and then he begins recruiting the main members of his crew.

Characterization is the paramount positive aspect of this venture. In the first few pages itself we are introduced to three interesting characters and in addition: Mrs. Hacklett and Anne Sharpe. But the crew of the Cassandra (Hunter’s ship) have the best descriptions. There’s the gigantic but mute dark-skinned man Bassa AKA The Moor, the most physically blessed of the group. A woman hiding (though known to most of the inhabitants of Port Royal and the entire crew) behind a masculine disguise, Lazue, who is an expert marksman (or markswoman). A Frenchman who is the embodiment of an assassin, Sanson. Enders, who on the island operates as a barber-surgeon but also excels as a sea artist (he can expertly maneuver any ship). Last but not the least, Don Diego AKA Black Eye AKA The Jew, who is an inventor of offensive instruments such as grenades. The complete team is comprised of a little over fifty-five crewmembers.

Two things are made clear into Part 1 of the novel: the dangerous mission and the B-movie villain. Only a year or many months prior to this expedition, another piracy expedition ended tragically, with the ship destroyed and all the crew tortured then killed. The strategist behind these killings is none other than Captain Cazalla who is in charge of guarding the targeted fort. It is also revealed later on that he was responsible for providing Hunter’s younger brother (who was involved in the previous journey) with the most humiliating of deaths. Still, Hunter is a practical man and is not out for revenge—in the beginning.

All these subplots seem realistic enough until we are introduced to witchcraft and a sea monster. Here, the story becomes completely Crichton-esque without losing grip on the 17th century reality it’s set in. If it had become too unrealistic then it would’ve looked like paying homage to the Pirates series of features. Yet, Pirate Latitudes is superior to some of the Disney entries. It is almost authentic to the full and still incorporates dry humor which are a trademark of POTC.

Where the novel fails is definitely in two factors: amateurish writing and predictability. Those who have read Crichton’s previous works will definitely sense that this one was written prior to his earliest books. The writing style seemed more suitable for young-adult readers and only when sexual sequences are illustrated then we are reminded that the target audience includes adults.

Secondly, this novel is too foreseeable, especially in regards to some of the major events. Whether you are swiftly skeptical about honor among thieves, or correctly guessing the outcome of the clichéd sequences, you were not alone in these estimates. Pirate Latitudes is reminiscent of the 80s Hollywood action movies where the fiends always get what they deserve, though here this isn’t entirely true.

To end with, Pirate Latitudes will never be in the top ten of Crichton’s best novels, but is certainly not one of his lowest rated. The pacing is perfect and characterization is top-notch. These two points reminded me of reading Crichton’s earlier work titled Timeline though the latter was better in every way. If you favor sea adventures then Pirate Latitudes is your glass of rum. But for readers looking for an original sci-fi action novel then Timeline is the superior choice.