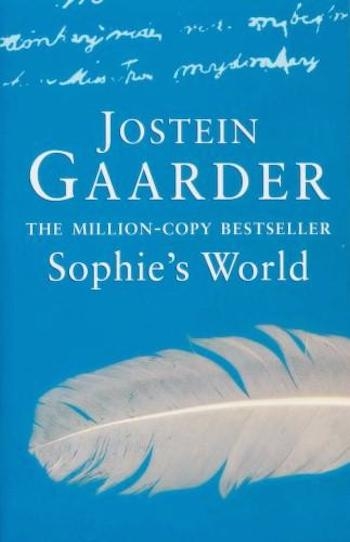 Recommended to me by a lecturer at my university, I can say there has never been a better literary suggestion. Sophie’s World was written by Norwegian author Jostein Gaarder and was published in 1991. Since then there has been one film adaptation and one PC game based on it.

The plot is like no other. It concerns 14-year old Sophie Amudsen residing in Norway in 1990. She is thrust into the world of philosophy after exchanging letters with a wise yet mysterious stranger. 80% of the novel deals with the history of philosophy since the creation of the earth till the late 20th-century period.

The novel is also more of an educational read. For those expecting sorcerers or dragons, there is fantasy here, but not as limitless as those in the bibliography of scribes such as J.K. Rowling and Christopher Paolini. And what separates Gaarder from those authors is undoubtedly his extensive research on the subject matter. The wordsmith leaves no stone turned and we are given profound information about philosophy whether it be concerning the Ancient Greeks or even the prominent 20th-century European thinkers such as Frederick Nietzsche, Jean-Paul Sartre and many more.

Sensitive topics such as religion, ethnicity, equal rights, etc. are discussed so cleverly that they always seem to be found in the backdrop of the story. Yet these topics form the backbone of the central theme of Sophie’s World. And that’s to not sugarcoat these issues for the readers—especially the younger ones.

Typically, children are advised to read books such as Great Expectations, the Harry Potter series and so on. Still, Sophie’s World makes a superior read to all of them. And this is done by providing an equilibrium between fantasy and fiction. Though this balance has been done a million times in novels—this was the first time I’d seen it done so well for a work aimed at children.

Sophie’s World gets more exceptional with each page turned. It ends better than it began and I found its conclusion to be one of the most unforeseeable plot twists I’ve ever come across in novels. I won’t be surprised if fans would want to re-read this as it has as much replay value as a video-game with an out-of-this-world campaign like The Last of Us.

In the end, I recommend this to young readers and veterans alike; to dabblers and the professionals in philosophy, and finally to anyone who wants to include an entry into their bookshelves for a work that cannot be properly classified into a single category. I hope after reading Sophie’s World I can finally decide whether I want to pursue my graduate studies in Philosophy or not.