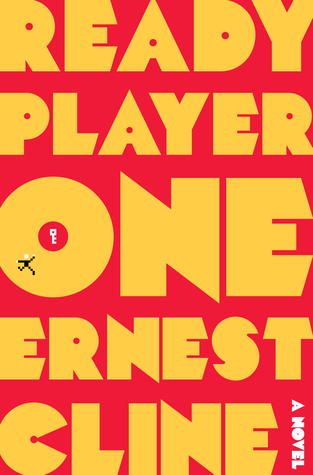 This book was recommended to me by my dearest literary friends, Obaid and Syed Ali, and I could see why the former kept reminding me monthly to finally start it. Ernest Cline’s Ready Player One is another entry in YA dystopian fiction which has swept the readership of the 21st-century beginning with series such as The Hunger Games, The Maze Runner and Divergent. I’ve only watched the cinematic adaptations of the afore-mentioned franchises but I would still be comparing them as they share the primary plots of their source material.

RPO follows the underprivileged teenager (here we go again) Wade Watts who lives in a poverty-stricken neighborhood with his aunt and whoever happens to be her boyfriend-of-the-month. Both his parents have died (OK seriously!?) and he only gets to stay with his aunt who is capitalizing on the extra coupons she gets from the government by giving him a place to reside. Now the introduction was so clichéd I really thought the whole story would turn out like that, but I was dead wrong.

When Wade is not wasting time with his new family, he is busy roaming around the OASIS. It’s a virtual reality where people use avatars to attend school, visit planets, go clubbing, etc. It’s basically a virtual social media or an open-world videogame. But what’s most intriguing about this domain is that the late founder, James Halliday, left a competition following his demise of anyone in the OASIS to be a part of. Whoever finds the prized Easter egg will not only inherit Halliday’s fortune of billions but also take sole control of the OASIS.

Whoever is a contender for this prize is known as a gunter (an egg hunter). But there’s also a corporation known as Innovative Online Industries (IOI) who wants to find this egg and take control of the OASIS by monetizing it (it’s always been a free-to-register-and-use domain). The year is 2044 and the world is facing an energy crisis but capitalism still reigns supreme. These egg-hunting capitalists are referred to Sixers by the non-capitalists.

Five years have passed but no one has even found the foremost key of a total of three that leads to the final gate. That is until Wade finds the first one, and he goes from a nobody operating inside a small space, to a world-renowned superstar. But will he be able to find the Easter egg in the OASIS before the other gunters and/or even the Sixers? That concludes our first act.

The most beloved factor of mine for RPO, other than the awesome plot, is the number of pop-culture references especially from the 80s. We have mentions of motion-pictures such as WarGames, Blade Runner, etc. and other pop-culture galore such as the Canadian band, Rush, and videogames like Dungeons of Daggorath. Not to mention the original content such as videogames which are all products of Cline’s imagination. Mainstream-art lovers will love this book even if they find the plot clichéd or the follow-through monotonous.

Ready Player One is classified as dystopian science-fiction. But the narrative is much more deeper than a mixed-genre. It has an underlying social commentary on the world in the 21st century. People have consistently been escaping reality by logging onto Facebook, Twitter, etc. Want to browse the web for information? Try Wikipedia. Want to watch free videos? Try YouTube. Almost everything you dreamed of (or never dreamed of) is available online. Soon grocery shopping might also be replaced by online grocery browsing.

But has this made our lives easier? Of course. Yet with one flaw: We have lost our sense of reality. This theory reminds me of The Matrix which really utilized this argument and managed to make three movies out of it. Are we living in a simulation? The same question is cleverly asked throughout the novel several times as well.

The ending is also open to readers. Just like in social media, RPO features two-way communication. Cline was skilled enough to use a first-person mode of storytelling where our protagonist constantly talks about how his life is defined by an immersion rig, gloves, visor and everything he uses to turn off reality. In a way we employed humans can also say that our lives can be defined by the working hours of 5 to 9. Still, we live in reality (and we also get days off). After Wade finds the Copper Key, majority of the world starts looking for it.

This shows that RPO also discusses another vital point and that is internet addiction. The OASIS can be compared to drugs such as tobacco and cocaine which stimulate our dopamine levels. We get a sense of joy from being a gunter because we’ll inherit a fortune, when truthfully only one person will become rich, the same as being the one in a million not dying from drug overdoses. RPO clearly justifies that the millennium generation are harming themselves from addiction as much as the people of the past did, just that the 21st century’s poison of choice is the internet.

The ending is not only open to readers but it serves as a reminder that the OASIS is not real. I loved the conclusion so much that I’d love to spoil it here, but that won’t do justice to potential readers. All I can say is that it has one of the best closures I’ve ever read.

Furthermore, RPO distinguishes itself from other dystopian titles by being fun throughout its 350-plus pages. When The Hunger Games has a fatal competition, and the Maze Runners are running for their lives, in RPO nobody can actually die when their avatar is erased in the simulated universe. And that is what makes the digital ride worth it. The book is also quite optimistic, something which none of the four The Hunger Games flicks could showcase within their totally nihilistic settings. RPO did for novels what Star Wars did for movies—it introduced a new hope.

So, put on your reading glasses and take a rollercoaster ride through adrenaline-packed fiction where no paragraph is tediously written. RPO has an essence which I believe can be expressed through a multitude of mediums such as radio, gaming, etc. It has already been released as an audio-book narrated by actor, Will Wheaton. And has a theatrical version helmed by Steven Spielberg, known for making blockbusters out of sci-fi biggies such as Michael Crichton’s Jurassic Park, releasing in the near future. But will the movie live up to the original’s legacy? We’ll find that out on 31st  March, 2018. You better be ready—no pun-intended.