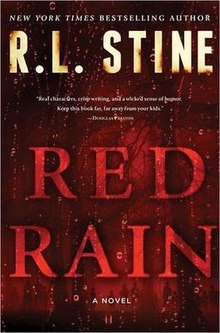 Contrary to popular belief, Red Rain (2012) is R.L. Stine’s sophomore attempt at an adult-orientated novel. His first was 1995’s Superstitious, but after finishing the former, I’m certain that I won’t be checking out the latter.

Here’s the synopsis listed on Amazon: After travel writer Lea Sutter barely survives a merciless hurricane on a tiny island off the South Carolina coast, she impulsively brings two orphaned twin boys home with her to Long Island. Samuel and Daniel seem amiable and intensely grateful at first, but no one in Lea’s family anticipates the twins’ true evil nature—or predicts that within a few weeks’ time her husband, a controversial child psychologist, will be implicated in two brutal murders.

Akin to how the trailer of a movie is sometimes better than the film itself; the plot of Red Rain is superior to the source material. The story itself starts badly with an amateurishly written Prologue. If this work didn’t belong to a favorite author of mine, I would have stopped reading it after the Prologue itself. Stine is best-known for his Goosebumps series which are aimed at children, and it looks like the storyteller was unable to adapt his writing style to cater to a grownup audience. Even the mode of expression used in his YA series, Fear Street, was much more mature than the one he exhibited in this disaster.

The descriptions are childish, the dialogues are super-cheesy, the characters are clichéd, the storyline is by-the-numbers, and the ending is not only ultra-predictable, but laughable! After you’ve concluded reading this tale, I wouldn’t be surprised if you’d have thought it were authored by a twelve-year old. And what irked me the most was that the narrative came across as comical rather than terrifying. Not to mention the innumerable plotholes that are featured in the yarn: 1. The process of adoption is made to seem like child’s play here. 2. It’s effortless for a child psychologist not only to evade the police but also the FBI. And the comprehensive list of flaws that I detected is beyond embarrassing, particularly seeing how this work is penned by a writer with decades of experience.

However, some passages were actually scary, and a minority of the humorous incidents, notably one where Sergeant Andy Pavano presses the bell of the wrong residence to announce the death of a relative of the household, were actually entertaining. But the total amount of these positive happenings is infinitesimal.

To end with, Red Rain is not only one of the worst novels that I’ve ever read, but also, in my opinion, the lowest quality of work that Stine has ever produced in his entire career. I am even further disappointed by how awful this book was as this man inspired me to take up fiction-writing. This novel might please longtime fans who are craving 90s nostalgia, but I urge new readers to either pick up a Goosebumps or a Fear Street in order to properly begin your journey into the world of R.L. Stine.