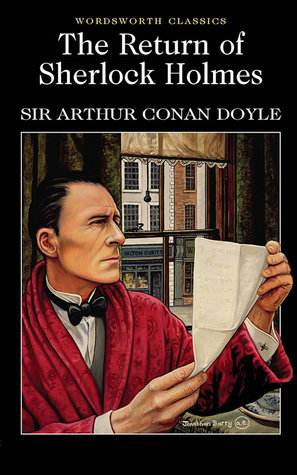 The Return of Sherlock Holmes (Wordsworth Classics) by Sir Arthur Conan Doyle is the final short-story collection penned by the inventor of the fictional sleuth. It includes the last 13 canonical limited-words tales featuring the adventures of Holmes and his colleague, Dr. John Watson.

It was a treat to finally have finished this last compilation of Sherlockian short-fiction. Years ago I had completed all the canonical literary material featuring Holmes save for this one. Having forgotten about this book I only noticed it last week when I was inspecting my oldest bookshelf.

I started reading the original SH stories after watching the first season of the BBC program, Sherlock, in 2010. I had doubts about going through the books because their contents took place in the last 1800s and the early 1900s, while the show was based in the 21st century.

However, I was amazed at the quality, and even more so, by the pace of Doyle’s writing. Unlike other 20th-century mystery scribes, such as Agatha Christie and Ruth Rendell, Doyle’s penmanship showcased how the power of reasoning could overshadow any seemingly unsolvable crime. Doyle’s Sherlock Holmes was also a far more intellectual detective than both Christie’s equally Hercule Poirot and Rendell’s Inspector Wexford.

Without further ado, I present to you each story below, in order of their appearance in the table of contents, reviewed separately. The individual ratings, as well as the aggregate score, can be seen in the Review Overview section following the end of this article. SPOILERS ahead.

That’s it for the lineup of the 13 stories incorporated in The Return of Sherlock Holmes. What makes this Wordsworth Classics edition even better is the foreword written by John S. Whitley, Emeritus Reader of American Studies, at the University of Sussex. In the introductory section of this book, he has analyzed the everlasting value of Sherlockian literature, as well as the mystery genre as a whole, with an incomparable flair.