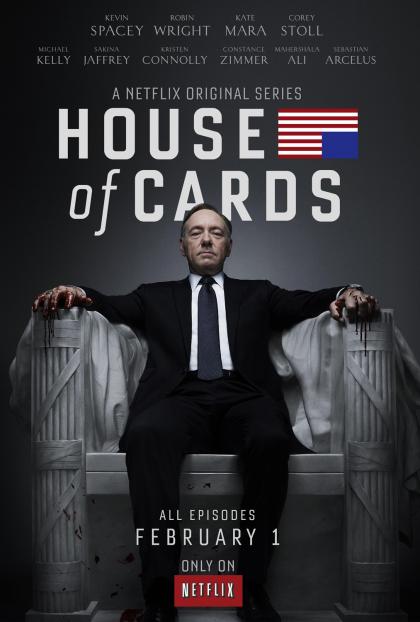 House of Cards is a rarity in US television. Every other governmental series deals with international issues. This one plunges into the depth of domestic politics.

David Fincher’s directorial style was evident in the initial two episodes. The nocturnal lighting and dark visualization are Fincher’s trademarks, who specializes in the thriller genre.

The settings are not alone in catching the eye. Dialogues are artistically written and they showcase how this serial can still be enthralling without action to back it up.

Last but not least of the pros is the acting. Kevin Spacey flourishes as Congressman Frank Underwood and none can do it better. Another point justifying why this show is unique is that it depicts the breaking of the fourth wall; the actor looking directly at the camera resulting in a first-person monologue. And using this technique cleverly is not an easy task. Yet House of Cards proves it’s a needle in a haystack in the realm of Netflix shows.

However, the series does have flaws. I had to half-sleep my way through the starting four chapters. And only when I saw the fifth I became spell-bound to this spectacle. I wasn’t shocked that Joel Schumacher, one of my favorite film-makers, directed the fifth and sixth episodes—because his branded thrill-plus-drama finesse was quite evident.

Another drawback is the picking of Kate Mara as journalist Zoe Barnes. While the rest of the cast is superb, she plainly isn’t.

All in all, House of Cards is led by the legendary Kevin Spacey, and has a undoubtedly gripping narrative. Season one might be slow to start, but tremendously builds up tension from the middle, and ends with a winning hand. So have a watch if you want to see for yourself why power is considered more important than money.