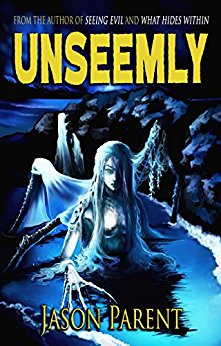 I became a huge fan of Jason Parent after going through his story, Easy Pickings, on Wattpad earlier this year. The title might not be that scary but the content was frightening from onset to the end. It was dark horror that will appeal to both adolescents and adults. And that’s where Parent succeeds—at writing a horror yarn which can be targeted to a variety of ages.

So, it did not come as a surprise that I ultimately picked up another work by Parent. Unseemly (2016) is a horror novella by the afore-mentioned wordsmith, and just like Easy Pickings, it is truly unputdownable. As a novella is longer than a short-story but shorter than a novel, I consider it the hardest form to write in, especially in a genre where a lot of effort has to be put in to balance the storyline with the thrill factor.

Easy Pickings was itself short so I wasn’t shocked if Parent would be able to get away with middle-length literature. The plot is as follows:

Peter thought he was done with grave robbing, but when a former business partner lures him out to Dungarradh, a small Scottish island with a big secret, he finds himself waist deep in more than local folklore. Is the disappearance of his teammate truly the work of the legendary fae, or is a sinister force at play?

The synopsis is quite catchy and I knew I was in for a treat after initially reading it on the back cover. I found the most positive quality to be the characterization. Our four major characters: Peter, Dervish, McCoy and Corbin are all distinct from each other, and this makes for an exciting read when they are put in uncomfortable situations.

Peter is undoubtedly the most intriguing figure. He has been divorced from his wife and has two children who don’t even resemble him (this is literally a reference from the novella). In the starting five pages we have a character who needs money

but was done with his former illegal ways of collecting it. Dervish comes across as interesting individual as well. Whereas Peter and McCoy are smart and reserved, Dervish is extremely impulsive just like his associate, Corbin. So we have a balance of personalities.

I applaud Parent for penning memorable characters even though this wasn’t novel. The second-best factor is the dialogue. The discourses between the primary figures is filled with humor and sarcasm. This is especially true for the speeches by Dervish and Corbin, who don’t seem to care what other people think about them.

As I mentioned before that balancing story with shock value is quite difficult when authoring a horror novella. Yet, Parent managed to do this to a tee. Never does the plot become lost when dread is present and vice versa. The equilibrium is excellent and most readers will agree with me on this aspect after they’ve finished this book. I also loved the descriptions, especially of the beautiful things, which shows that Parent’s prose can be poetical at times as well. It also created a juxtaposition between the enchanting and the horrifying; another quality most horror-fiction writers lack.

However, there were noticeable flaws. Firstly, I thought that Unseemly did not have a consistency in its brilliantly-penned lines. Some passages seemed inferior to others. For example, I found myself reading two professionally-written paragraphs while the next two looked completely amateurish.

Secondly, the climax was anti-climatic for me. This could be due to my viewing of the horror classic, The Wicker Man (1973) followed by its less appealing 2006 remake, last year. I found The Wicker Man and Unseemly to share similar themes but both are comprehensively different. Still, if you liked that movie you’ll surely enjoy reading this project.

In conclusion, Unseemly is the first novella to be reviewed on Literary Retreat, and it was an honor to both read and review it. This one is recommended to horror enthusiasts looking for something to be read in one setting, yet to be remembered for all of time.

The Mind is a Razorblade by Max Booth III – Book...