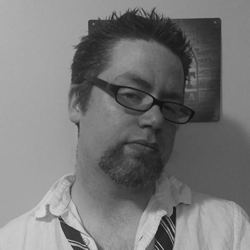 Q1. Curtis, it’s wonderful to have you with us for this Q&A. Please tell us about your humble beginnings as an author.

Thank you for having me! I started writing comics around 2005 and published several short anthology pieces, one-shots, web-comics, and a few graphic novels over the next ten years. I had limited success in comics and they are expensive to produce, so I decided to try my hand at writing prose.

In 2014 I sent my first novel, The Devoured, to a freelance editor. I didn’t know it at the time, but the editor was putting together a new publishing imprint and offered me a contract. The Devoured received a more positive response than any of my comics had, so I switched gears and decided to mainly focus on prose moving forward.

H. P. Lovecraft and Clive Barker are probably the two biggest horror influences. The works of both possess the kind of intelligence and wild imagination I strive for. Lovecraft’s themes of cosmic nihilism echo throughout much of my own work.

More on the crime side of things I would say that Robert Bloch and Duane Swierczynski are both writers I have consciously drawn from. Bloch was a master of tension and Swierczynski has one of the most engaging and exciting writing styles of anyone I can think of.

There are dozens of others of course, across many mediums—Neil Gaiman, Alan Moore, Frank Miller, Quentin Tarantino, Wes Craven. I could go on and on.

Two things. First, always be honest in your fiction. What I mean by that is to write from the heart and imbue your work with genuine passion. Create plots and characters that intrigue you and explore themes that you find meaning in. Don’t get caught up chasing markets and trends. The chances of making real money at writing are slim, but you can absolutely create a story that you are proud of for the rest of your life.

The second bit of advice is this—focus on the work. Talking about being a writer isn’t going to make you one. Posting pictures of your laptop at the coffee shop won’t help your word count. Daydreams and excuses don’t meet deadlines. Sit your butt in the chair and write.

It doesn’t have to be every day, but it should be damn close. Schedule your writing time, and guard it like a rabid dog. It can be on the bus to work, at lunch time, or in the morning before anyone else wakes up. It can be 45 minutes a day or 4 hours a day. Whenever it is, just do it.

I’m on kind of a fitness kick. I started lifting weights again a few months ago and I’m enjoying that right now. I also surf every once in a while but it’s hard to find the time these days.

Role-playing games have been a lifelong hobby of mine as well. I play some video game RPGs, but I’m mostly drawn to tabletop games. D&D Second and Third Edition, Pathfinder, and Aberrant are my favorites.

Music is another of my lifelong passions, though I don’t really play or compose anymore. I love finding new underground music and falling down rabbit holes of classical music that I have yet to discover. One of the most rewarding parts of writing Black Heart Boys’ Choir was all the classical music research I did for it.

I have a new collection coming out from Weird House Press in the fall of 2020. It’s called Devil’s Night and it is going to be a series of loosely connected horror stories that take place over the course of a single Devil’s Night in Detroit, MI.

If you aren’t familiar with Devil’s Night, it’s a weird tradition in Detroit where people would set fires and raise hell across the city on the night before Halloween. It started off as a night of harmless pranks but by the late 80’s there were hundreds of fires burning across the city every year. It hit its peak around 1987 but it’s not so much of a thing anymore.

Other than that, I am working on some short pieces for anthologies and magazines. The only one that is set in stone is a story called The Truth About Vampires which is slated to be released in the first issue of Penumbra, a new weird fiction journal edited by S. T. Joshi and published by Hippocampus Press.