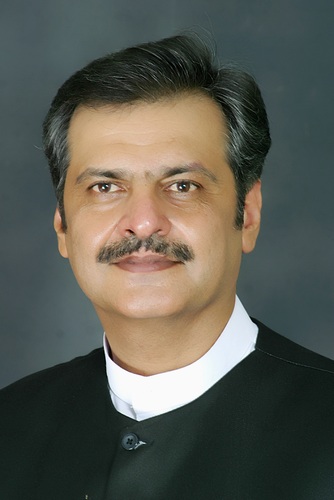 I had the rare privilege of interviewing Dr. Saeed Elahi last June. He is a medical doctor, former MPA (PML-N), and currently serves in the honorable position of Chairman Red Crescent Pakistan. To know more about him, please read our Q&A session below.

Q1. Please tell us about your humble upbringing.

My father was a Civil Officer who has served under the Pakistani government for 34 years. His positions included, but were not limited to: Assistant Commissioner, Deputy Commissioner, and Federal Secretary. He was a very honest and upstanding citizen. My mother supported our family as a caring homemaker. Our family comprises of three brothers. I am the eldest. My middle brother is also a Civil Officer. And the youngest is a businessman.

Q2. Why did you choose to enroll in Allama Iqbal Medical College Lahore?

It wasn’t much of a choice really as there are merit lists for medical colleges, and the highest merit was for Allama Iqbal Medical College, so I achieved the required marks for that institution and thereon began my doctoral journey.

Q3. Your political backstory and why did you choose to join PML-N?

Basically, I became active in student politics during my adolescent years. So it was only natural that I transitioned towards professional politics later on. I have held administrative positions in leadings schools and colleges throughout the country. After graduating from AIMC, I was elected as Secretary General, and then later on, as President of Pakistan Medical Association.

I joined PML-N in 1995. Nawaz Sharif was a childhood neighbor of mine. My main reasons for joining PML-N were: 1. Infrastructure. 2. Economy. 3. My own acquaintanceship with Mr. Sharif since my youth.

Furthermore, I acted as his spokesman for three years during his exile.

Q4. Posts that you have held and/or organizations that you’ve served under?

Q5. Which countries have you visited? And what’s your favorite destination?

During my student years, my PMA (Pakistan Medical Association) years, as a Parliamentarian, and now as the Chairman of Red Crescent, I have visited almost all the continents across the globe. If I could pick out any destination as my favorite that would undoubtedly be London. This is because it incorporates a multiracial society, the demographics of Asians are quite high there, and it’s like a perfect blend of East and West can be found in a singular setting. So, if I wasn’t currently residing in Pakistan then I’d be living in London.

Q6. When did you become Chairman of Red Crescent Pakistan?

I have served as Chairman of Red Crescent Pakistan since 2014. Red Crescent is the oldest humanitarian organization in the world. Since the onset of my tenure I have introduced several new initiatives such as Sustainability, Transparency, and Improvement.

Q7. Why did you choose to leave Politics?

I became disillusioned during my tenure as a Parliamentarian. I wanted to do something that was beneficial to the community. Hence, I started browsing through my job offers so that instead of a Parliamentarian I could act as a Humanitarian. Chairmanship at Red Crescent Pakistan is an honorary job especially because the altruistic work you do leaves you satisfied. This is because by the end of the day you know you have done something for the greater good.

I wasn’t impressed by the ever-changing political structure of our nation—especially in regards to the various unfavorable happenings occurring throughout Pakistan. Thus, when the parameters of politics changed I thought that it’s high time that I alter my own mindset as well. And this is primarily why I chose to embark on the philanthropic path.

Q8. I have read online that you have written a book about Nawaz Sharif’s exile. Could you please inform us more about this work?

I wrote a book on Nawaz Sharif which chronicles his years from October 12, 1999 (the day the military revoked his governmental power) until the year 2005. It’s a work of non-fiction with an emphasis on the period of Nawaz Sharif’s exile in Saudi Arabia. I used to store whatever he said during his days of banishment in my mind, and then reproduced his viewpoints in this book that was published by Hafiz Publishers Lahore in 2006. The title of the book is Jala Watan Wazir Azam (Prime Minister in Exile).