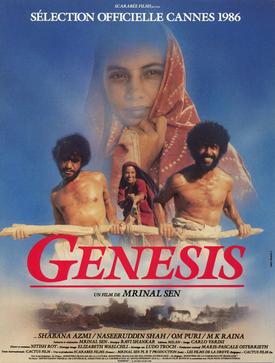 Genesis (1986) is one of those films that starts out as a clichéd art-house flick, but it gets better and better, as the narrative moves forward.

The Plot: A farmer (Naseeruddin Shah) and a weaver (Om Puri) are living a peaceful life of manual labor when they suddenly come across a woman (Shabana Azmi) who disrupts their daily routine.

The Good: The movie stars only four main characters—in addition, M.K. Raina plays the trader with whom the two men exchange goods with—but these four are enough to justify the small cast. The start is a bit slow but the picture really takes off once the woman is introduced.

It’s difficult to decide which thespian gave the paramount performance here. Both Shah and Puri were equally excellent, with Azmi being right behind them talent-wise, and Raina giving a satisfactory supporting act. The dialogues, especially those exchanged between the farmer and the weaver, were brilliantly penned, hinting not only at how those two perceived the world, but also how they saw each other for who they actually were.

This feature’s greatest strength is incorporating multiple scenarios into its 105-minutes running time. A lot of symbolic themes are discussed whether it be through character speeches, enlightening sequences, or the overall cinematography. The themes of poverty, greed, lust and others are not depicted on a grandiose level, but are instead fitted into the context, with just the right amount of subtlety. Mrinal Sen has directed a proper thought-provoking venture.

The Bad: The movie lacks a central plot and some scenes were just too predictable. The motivations of the main duo are at times perplexing.

The Verdict: Despite not beginning well, the film gets more and more intriguing as it moves along, and then it culminates into one of the most unpredictable endings ever. Genesis is the epitome of a character-driven drama that also does justice to its narrative.