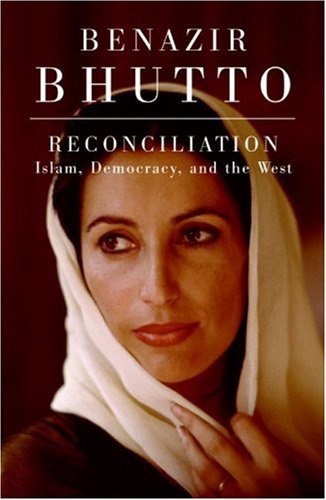 “There has been enough pain. It is time for reconciliation.” – Benazir Bhutto (Chapter 6)

I was driven to tears after finishing Reconciliation: Islam, Democracy, and the West by the late two-time Prime Minister of Pakistan, Benazir Bhutto. The year 2007 was both a growing point for me and also a tragic period. I had just finished my first year at Al Ain Juniors School and three months into eighth grade, the worldwide media aired the explosive transmission that rocked not only the Islamic  Republic of Pakistan, but also the entire world. Benazir Bhutto was martyred on December 27, 2007. And just two months prior to her assassination, she had landed on Karachi soil after eight years spent in exile abroad. You can read more about her murder here.

As this is the first work of non-fiction that I have read, I’ve categorized my review on a chapter-by-chapter basis.

Note to the Reader details Mark Siegel’s honor of having collaborated with Benazir on this book.

In Chapter 1, Benazir recounts her October 2007 return to Pakistan after having lived in banishment since 1999, and subsequently being greeted by a whopping three million people. I found this to be a highly emotional introduction which allows the reader to drop their guard, and might also aid in removing any preconceptions that the person had before beginning this autobiography.

Chapter 2: The Battle Within Islam: Democracy Versus Dictatorship, Moderation Versus Extremism. The heading speaks for itself and the content matches with what the title promised. Topics discussed in expressive detail include the misalignment of Islam with extremism, especially in relation to how terrorist organizations have tainted the reputation of this Abrahamic faith, as well as Benazir’s philosophy that Islam and democracy can, should, and must co-exist in Muslim-majority nations.

Chapter 3: Islam and Democracy: History and Practice. It includes such thought-provoking insight on the relationship between Islam and democracy that I’ve never read before in my life. What I adored the most about this section was that the political systems of Muslim-majority countries, especially those that I do not know much about, are explored in a thorough fashion.

Benazir cites Turkey, Indonesia, Senegal, and Mali as successful Islamic democracies, while in her opinion, the latter three stand out for being prosperous postcolonial republics. The 2007 status of the Five Muslim Central Asian Republics (Kazakhstan, Kyrgyzstan, Tajikistan, Turkmenistan, and Uzbekistan) that rose after the 90s collapse of the Soviet Union are also discussed. The subchapter on the dissolution of Bangladesh from Pakistan explores the covert side of this separation; mentions those events which must’ve been confidential until the publication of this memoir.

Chapter 4: The Case of Pakistan examines Pakistan’s constitutional past from its birth to the year 2007. Benazir also highlights her family’s history of reshaping the politics of Pakistan, chiefly pertaining to the rise and fall of her late father, Zulfiqar Ali Bhutto, and her own mirrored tenure as the PM of Pakistan. She also compares the Zia-Bhutto exchange with her own opposition to the Musharraf region. The year 2007 is also expanded upon vividly, specifically her meetings with the PPP, and also with the former President of Pakistan, Pervez Musharaff, with whom she discussed the possibility of a democratic Pakistan with no strings attached.

Chapter 5: Is The Clash of Civilizations Inevitable? Here, Benazir points out that those who agree with Samuel Huntington’s essay published in the journal Foreign Affairs are identified as clashers, while those who disagree with it are called reconciliationists. And she places herself in the latter category. Benazir is totally against  the American academic’s thesis though, in my opinion, Huntington is right that cultural disparities will be harder to solve than ideological ones.

I have polarized thoughts on Chapter 5. Benazir shares other scholars’ viewpoints on the Clash of Civilizations, providing both positive and negative interpretations, then ending with her own complete disagreement with Huntington’s magnum opus. In my point of view, Huntington’s essay wasn’t flawed in certain areas, even if Benazir found Huntington’s theory of cultural conflicts being the most difficult to resolve, there is still truth to the matter in hand, as you can refer to the current volatile atmosphere in Myanmar. However, Benazir does strike a chord with her statement that modernization leads to more political and religious tolerance rather than Huntington’s opinion that modernization correlates with fundamentalism. She can state that the Clash of Civilizations is incorrect but I believe that the ideology the thesis conveys is at its best half-right.

Benazir also increasingly points out that the West should further liberalism in Muslim democratic nations whereas I believe that first internal conflicts should be resolved then only can a country, democratic or not, focus on international issues.

All in all, this chapter concluded brilliantly with Benazir’s recounting of her days spent at Harvard, and how American feminists, Kate Millett and Germaine Greer, inspired her to spread the cause of women’s rights in Pakistan. She is also right in saying that there is no lack of female pioneers in Pakistan such as herself, Fatimah Jinnah, etc., but the only women to step forward are those who belong to upper-middle class and upper class families. Benazir’s ability to look at Islamic democracy within the realm of contemporary society is awe-inspiring. She can compare and contrast societal norms with relevant ease and I would’ve loved to meet her in person to discuss the various happenings across the globe.

Chapter 6: Reconciliation. We have finally reached the titular chapter. It’s justly penned as a farewell note and Benazir discusses what many 21st-century Muslim political-thinkers repeatedly say, that political, intellectual, scientific, and economic powers have been lost, especially since the colonial era.

It was heartwarming to read that Benazir directed a lot of the country’s budget to the educational sector, and by doing so, followed in her late father’s footsteps. I also agree with her statement that the rise of militant madrassas has curtailed the educational development of the lower class.

The final chapter ended on a high note. Nevertheless, Benazir Bhutto’s ideology throughout the book, especially in this chapter, seemed to a greater extent, two-sided. At one end she urges the West to change their perception as well as raise their aid to developing Islamic nations. On the other hand, she jots down ideas about models which should be adopted by the Muslim world. Thus, this section came out as confused though the entire book was quite captivating. If there’s such a thing as too liberal then that would describe this closing chapter. Her thoughts on women’s rights were brilliant as these seemed more grounded in her philosophy of pragmatism, and they did not come across, in any way, as fantastical in nature. Wherever she concentrates more on local issues, without any kind of influence from Western ideals, can her liberalism be acknowledged as practical.

Afterword, Acknowledgements, and Notes (Glossary) follow Chapter 6. The Afterword is written as a dedication to the late Prime Minister by her husband, Asif, and their children, Bilawal, Bakhtawar, and Aseefa. The Acknowledgements section allowed me to identify all the contributors who deserve to be applauded for such a well-researched and comprehensive analysis on Islam, Democracy, and the West.

“Democracy is necessary to peace and to undermining the forces of terrorism.” – Benazir Bhutto