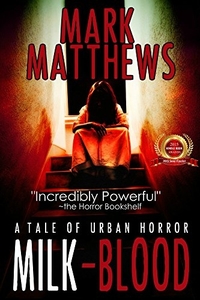 I have written more than a dozen short stories, and have also penned two unpublished novelettes, but I’ve never stopped trying to reach the word count of a novella. Even though I haven’t read many novellas, it is my favorite type of literature, so I was more than happy to start reading Mark Matthews’ novella, Milk-Blood (2014).

If the author’s name seems familiar, then it surely is. I’ve been a fan of Matthews ever since reading his story, Garden of Fiends which was published in the anthology of the same name. You can read my review of it here. Matthews’ domain is addiction horror, and just like I was suffering from some sort of literary withdrawal after finishing Garden of Fiends, I needed more, so I ended up reading and reviewing two of his other tales, Body of Christ and Stray.

However, Milk-Blood is the darkest of his writings that I have read so far. This is probably the reason that this is his most popular book judging by the sheer volume of its online reviews. The story follows Lilly – a little girl who lives across the street from a burnt down house – which houses a drugged up stranger. From the outside, both of these characters couldn’t possibly be related to each other. But only after these two figures come face to face with other, decade old secrets are revealed in shocking fashion.

Just like Matthews’ other entries in fiction, Stray and Garden of Fiends, Milk-Blood belongs to the genre of addiction horror. Similar to Stray, Milk-Blood is semi-fictional in the sense that Matthews has worked as both a social worker and therapist which inspired this tale, and many real-life settings were also depicted in the book, such as Brentwood.

Where Stray relied on emotion and drama to carry the plot forward, Milk-Blood relied on pure dread. The pacing was excellent, especially given the book type, and I reckon that it would have lost its momentum if it were published in novel form. Milk-Blood could be adapted into a superb screenplay, given its reliance on adrenaline-pumping action and heart-thumping fear.

The story is quite original and did not seem the least bit clichéd. It’s difficult to find unique horror stories nowadays, and in this case, discovering Milk-Blood was like finding a needle in a haystack. The usage of both third-person and first-person points of view stopped the pacing of the tale from becoming slow. The character design was also brilliant. Lilly is a ten-year old girl born with a heart defect which gives her skin a bluish hue. Jervis, the homeless man from across the street, is one of the most menacing antagonists I’ve ever read about in horror literature. The narrative is overall unpredictable as the twists cannot be foreseen until they have hit you like a needle to the vein – pun intended.

Unfortunately, Milk-Blood does have its flaws. I don’t think that this story is for everyone given the X-rated content, especially in relation to how Lilly’s mother got pregnant in the tale. Secondly, I felt that some ideas were being recycled just for the sake of pushing the narrative forward.

To end with, Milk-Blood is not Matthews’ worst work but it is also a far cry from his best. The writing style felt amateurish compared to his latter stories like Body of Christ. I recommend Milk-Blood to readers of hardcore horror fiction as it is not universal in its appeal. I look forward to reading the sequel, All Smoke Rises, as I really loved Lilly’s character.