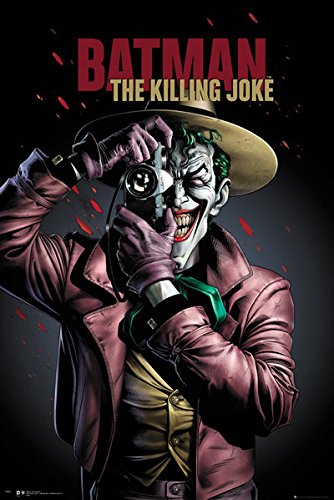 Based on the best-selling DC graphic-novel of the same name, Batman: The Killing Joke (2016) is not for everyone, but it might cater to a specific audience. Spoilers ahoy!

The Good: Firstly, before I jot down positive points for this animated adaptation, I wish to mention that I’m already a loyal fan of DC’s animated showcases. I might not have read all of their exceptional graphic novels, but I’ve seen most of their animated flicks (Batman: Under the Red Hood, The Flashpoint Paradox, etc.) and their live-action ventures (Watchmen, Batman v Superman). And although the latter do not count as superb transitions to the screen, 2009’s Watchmen is an exception to the rule and I still hold it in high regard, whereas The Killing Joke was hyped up as much as BvS.

Furthermore, the paramount aspect would be the voice acting. Kevin Conroy played Batman awesomely as he always does and the vocal counterparts of Barbara Gordon (Tara Strong) and Commissioner Gordon (Ray Wise) were equally brilliant.

Yet, as always, Mark Hamill stole the show. He’s had the perfect voice for The Joker since 1992’s Batman: The Animated Series and he’s lived up to his title as the vocal Joker by not only doing incredible work on the Arkham line of video games but also through his spectacular showmanship in this feature.

Despite the first half being boring, the second half-hour kicks off in great style, and this is mostly due to The Joker’s presence. He’s a character who’s made a name for himself as the arch-rival of Batman and the carnival scenes, the kidnapping of Gordon, all paid homage to the individual’s everlasting craziness.

But even the initial thirty minutes did show promise in some areas. And this is where I think the movie showed great finesse in relation to the well-penned script by comic-book writer Brian Azzarello. The dialogues are undoubtedly the second-best aspect of this exhibition.

At one early scene we see Batman confessing to Batgirl that if she verges into darker territory then she’ll end up looking at the abyss. This is a tribute to Batman’s underlying psychology (and one which the original writer Alan Moore has worked so hard on) of nihilism. The philosopher Nietzsche has written, “Beware that, when fighting monsters, you yourself do not become a monster… for when you gaze long into the abyss. The abyss gazes also into you.”

This is why Batman finds it so difficult to actually kill The Joker, and even when Gordon is left devastated, the latter still urges him to do it by the book. In this animation, we see the more darker side of not only Batman, but of The Joker with the fiend’s origin story, being elaborated on further into the exhibition.

The conclusion of this flick came across as controversial. And it’s been based on many fan theories so I won’t be dwelling on those opinions. But the consistently murky atmosphere of the animation left me dazed with amazement, or it could just be that I regard the visuals as first-rate due to my preference for darker-themed showcases.

The Bad: Nevertheless, even with the skilled acting and sharply-penned dialogues, the animation style looked out of place. I’m sure the more grimmer looking flashback scenes of The Joker’s origin story were meant to look ominous, but the illustrations of the outskirts of Gotham city in the foremost half were dull. They did not depict that can be termed as creatively new for Gotham and instead it felt like director Sam Liu made this feature in a hurry.

Secondly, the illustration of Batgirl as a victim was badly clichéd. Take the case of CBS’ Supergirl where the story’s usually centered around the titular character’s emotions but at least it was a tad different and well utilized especially in terms of being a TV series. To show Batgirl falling for Batman and then almost beating Paris Franz (Maury Sterling) to death was simply a trope. I would even recommend Superman: Unbound (2013) as a superior depiction of the relationship between a mentor and their student if you wish to watch a better DC showcase.

Still, I liked the way Batman warned Batgirl of how Franz was objectifying her. Sure, it’s a controversial topic and deserves to be analyzed, but I repeat that Azzarello used his literary strength by allowing individual exchanges to lead the plot forward. His biggest mistake was not writing the entire concept as event-driven, and this is most likely the reason behind the analytical polarization between fans, critics, and amateur reviewers such as myself. 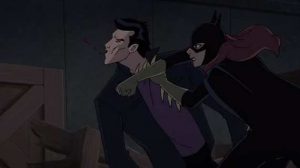 The Verdict: To end with, Batman: The Killing Joke is not DC’s finest animation as that title is still reserved by The Flashpoint Paradox (2013). But I’d still recommend this film to viewers who wish to watch a graphic-novel interpretation that is above average in its entirety yet can also be categorized as niche. Also, I hope that readers don’t take this recommendation as a joke—no pun intended.