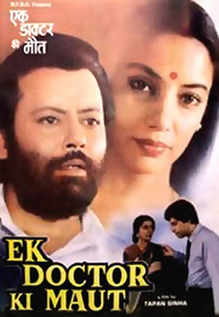 Ek Doctor Ki Maut (1990), known in the English language as Death of a Doctor, is a truly unforgettable masterpiece. It serves as a constant reminder to us why Parallel Cinema was invented in the first place. The following review contains spoilers.

The Plot: A doctor (Pankaj Kapur) spends years trying to develop a vaccine, only to find himself shunned by society after finally inventing it. He receives support from his wife (Shabana Azmi) and journalist Amulya (Irrfan Khan), and hopes that he ultimately gets the recognition that he deserves.

The Good: The plot is loosely based on the real life story of Dr. Subhash Mukhopadhyay who committed suicide after India’s first IVF baby was born. This film is cleverly penned by Tapan Sinha, who also directed this flick, as it doesn’t depict the exact nature of events nor the real-life personas of the characters. Sinha’s work is powerful as it presents to light the complicated treatment of the disease leprosy, as it would’ve been a lot more complicated if the authentic case was adapted to celluloid.

Not only is the screenplay superbly authored, but the dialogues are to die for. Although, the husband-and-wife exchanges between our two main figures get a bit tedious at the onset, but as the film progresses, they form an integral part of the overall narrative as it shows the woman’s unconditional love towards her spouse.

The most dynamic speeches are through Kapur’s character Dr. Dipankar Roy. From the opening, Sinha is able to show us an aloof personality who is fundamentally a workaholic, and always busy inside his private lab and paying no intention to his wife’s needs. In the earliest five minutes, Roy is brilliantly introduced as being a stickler for his intellectual rights. This not only helps the movie secure a spot in the hearts of the viewers early on, but allows Roy to be the center of attention throughout the above two-hours duration.

Shabana Azmi might be top-billed here, but Kapur is the star of this picture. His character is not only showcased as an eccentric, but his continuous focus on his work tells us  how much he was dedicated to his research. As one of Roy’s closest friends says in one line that Roy is not a doctor but a scientist, this cements our titular individual’s characterization.

The supporting cast also play crucial roles here. Irrfan Khan is seen in one of his most earliest roles as an idealist journalist who tries his utmost best for Roy to gain the respect that he deserves. Dr. Kandu (Anil Chatterjee) serves as Roy’s mentor and the thinker who helped with all his research. And then there are the antagonists as well, mostly senior doctors, who don’t wish for Roy to succeed due to him being a physician with an inferior degree.

Ek Doctor Ki Maut analyzes many factors thoroughly. I reckon that Irrfan Khan’s character Amulya acts as the subconscious narrator of Dr. Roy’s thoughts. Amulya is always saying that it’s not only our country, India, which does not favor geniuses but that Newton and Einstein were also called crazy in the beginning. He keeps reminding us viewers that sometimes fate is simply against a person but he should not blame his residence but look within himself for motivation. This reminded me of the quote by Friedrich Nietzsche that “What doesn’t kill you makes you stronger” and this one line defines the movie’s theme.

I think that without Pankaj Kapoor, the film wouldn’t have had the same initial impact it had on me, and never has an actor so completely immersed himself in his role. You feel what he’s going through and you support him despite the character continuously called himself a selfish man at the start of the venture. Of course, Dr. Roy is depicted as cynical, but who wouldn’t be in his position?

The most beautiful transition was when Dr. Roy and his wife are walking alone on the beach and he tells her that when I gaze at the stars, they seem to be looking back at me and declaring that you humans should step out of your limited capacity and aspire for something greater than yourselves. The beach walk contain dialogue that proves Sinha’s talent not only as reflecting reality on the screen but also enticing us with amazing words.

The movie ended better than it started. The figure whom this scenario is based upon, Dr. Mukhopadhyay had committed suicide after he was not allowed to share his achievements internationally, but Ek Doctor Ki Maut ends on a happy note. This was a wise decision by Sinha as he would’ve wanted this to be the conclusion for Dr. Mukhopadhyay’s sad tale as well.

The Bad: It was one of the most difficult tasks as a critic to pick out a negative factor from this almost-perfect picture, but an improvement could’ve been made on the flashback scenes. These are confusing as they are shown all of a sudden when a present-time based sequence is playing. If these scenes had been presented in a different shade, such as black and white, then it would’ve been better.

The Verdict: Ek Doctor Ki Maut might mean the death of one doctor, but it refers to the whole of society at that stage, as the majority were against Dr. Roy’s creation. This movie serves not only as the epitome of grand film-making, but also an educational lesson, that we must not treat anything ahead of our time with disdain.