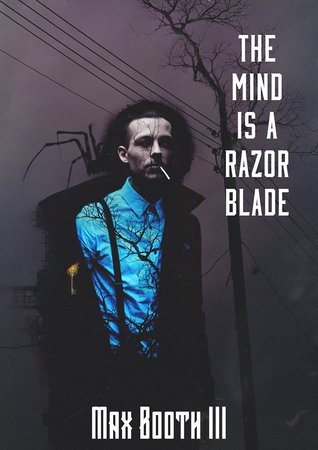 I first got a taste of Max Booth III’s fiction after reading his story, Everywhere You’ve Bled and Everywhere You Will, which was featured in the must-read anthology Garden of Fiends (2017). You can read my review of that collection here. I consider Booth’s tale to best one in the compilation. The perfect blend of humor and dread are what made it stand out from the rest of the stories. I wanted to check out more of his writings, and finally did, by reading his novel The Mind is a Razorblade (2014).

Now, the problem with the latter is that I had high expectations for it, and maybe this was the main reason I felt let down immediately after finishing the narrative. On the bright side, I wasn’t anticipating the fast pacing which was one of the highlights of Everywhere You’ve Bled and Everywhere You Will, but despite this being a longer work, it still incorporated the same level of consistency.

The Plot: Drowning, he wakes beside two corpses. His memory has been wiped clean. He doesn’t know his name, what he’s doing here, who these people are, or even why one of them is a cop. Nor can he explain his strange telekinetic abilities.

Questions plague his mind like hellfire, questions that begin a journey leading into the rot of downtown America, a journey that will not end until every one of his questions have been answered, despite who has to die in the process. Even if those who have all the answers aren’t human.

Even if the true monster he’s hunting for is staring at him through the mirror. (Amazon Link)

Now, judging from the synopsis, you might be thinking that this is a unique work, but that’s far from true, as the experimentation is all over the place. Yes, the plotline is catchy but it promised too much and delivered too little. That’s why I think it would’ve been better for the novelist to not have juggled with so many subgenres in one yarn. The theme of horror remains constant throughout the 247 pages. But adding so many elements led to the plot going all over the place, especially in moments you’d expect it to show some seriousness.

The best moments I liked were the romantic ones between our main character and his lover, Molly. Here, the description is top-notch, and I actually felt that Booth would’ve made as much a talented author of romance that he is already of horror. An example:

She briefly breaks contacts, but keeps her face close to mine, so close that I am able to breathe in her perfume and revel in its lovely scent. I never want this moment to end. I want to live in her perfume, retire my mouth on hers and never move away. This girl is my home—if I’ve only been positive of one thing tonight, it is that. My home. My warmth. My fuel. My life force. Our breaths heavy and reassuring, my eyes locked into hers and her eyes locked into mine, she smiles and says, “I’m Molly, honey.” (Max Booth III. The Mind is a Razorblade (Kindle Locations 1327-1331). Kraken Press. Kindle Edition).

If I were to pick a cinematic counterpart to this book it’d be Deadpool (2016). The slapstick comedy sequences coupled with action and gore are akin to the R-rated superhero flick—if only this novel’s protagonist was as interesting as the Merc with a Mouth. Also, the writing style is also amateurish compared to that of Everywhere You’ve Bled… though it comes as no surprise seeing how that was published three years after The Mind is a Razorblade.

To end with, fans of the splatterpunk genre will find this novel enjoyable, but it doesn’t have that wow factor which appeals to veteran readers of horror literature.