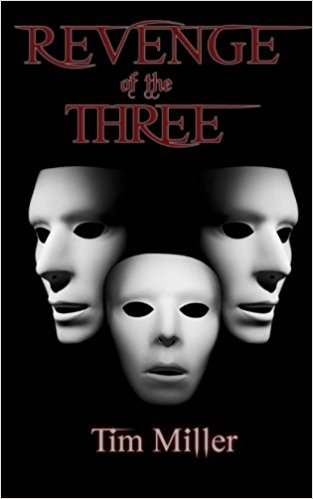 Before I started reading Tim Miller’s Revenge of the Three (2013) I was unaware of this being a sequel to his debut novel, The Hand of God (2011). It turns out that these two volumes are included in the Hand of God Trilogy—in which The Hand of Hell (2015) is the ultimate volume. After reading the second part it’s safe to say that I won’t be reading both the prequel and the sequel.

Firstly, the cover by Kate Kingsley does its job by being frightening, but it’s totally misleading. Revenge of the Three is not a dark horror story; not even a terrifying one. Yes, it ghosts, demons and the like. But I never felt scared once while going through the pages. I’d rather declare Revenge of the Three as a supernatural thriller and nothing else.

My reviews usually start by pointing out the pros then the cons. Yet, for this critique I’ve decided to analyze in the opposite manner. The most obvious flaw is the colossal amount of editing errors. There are a helluva lot of typos, extra spacing and other formatting mistakes. Despite these faults, you will still be able to comprehend what the author is trying to say.

Another problem is how amateurish the writing style is. This is the sophomore entry in the series but not Miller’s second novel. He has written many prior to this one. Yet I’ve read better debut stories on Wattpad—which were superiorly refined as well. This manner of authoring might not have been recognized as below average if this tale wasn’t an adult-orientated one. Miller’s approach to literature is more suited to being categorized as young-adult fiction.

The foremost half is extremely boring. Despite having enough backstory to summarize the previous part, it felt like the introductory 90 pages or so were prolonged foreplay, making its way to passionate sex. Thankfully, the remainder was much more entertaining to read ending in a blockbuster-like climax.

Now, I’ll state the positive points. The pacing is perfect from start to finish. Although, it’s comprehensive length is a little more than 180 pages, I concluded the novel in about 3 hours, and I usually take 6 hours or more to read a work of this length. However, Revenge of the Three was unputdownable for the totality of that duration. I was fully immersed in the events and this was one of the few paranormal yarns that had me hooked so intensely.

Furthermore, both the characterization and humor were top-notch. The main individual, Charlie, was quite an intriguing character who found himself involuntarily in a multitude of ironic situations. Comedy was ever present with constant inclusion of notable dialogues; whether it be the sarcastic comments or hilarious jokes told by the figures.

The highlight of this book is how the writer divided the modes of storytelling. The novel is separated into both first-person and third-person narratives. At first sight, this seems annoying, but I applaud Miller for utilizing these forms with memorable finesse.

To end with, Revenge of the Three is not a must-read or even a time-pass paperback. The plot would’ve worked better as a Hollywood B-movie, or an entire season of Supernatural, albeit a bad one.