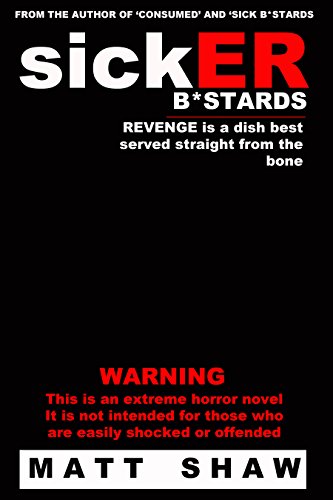 Usually, a sequel does not live up to the quality of the prequel, but Sicker B*stards (2014) is the exception to the rule. You can read my review of its predecessor, Sick B*stards (2014), here.

Here’s the synopsis from Amazon: Home truths pave the way for a journey of self-discovery and revenge in the direct sequel to Matt Shaw’s Sick Bastards.

In this follow-up, we go deeper into the backstory of our protagonist, John Burley. The book starts right off from where its forerunner concluded. We are acquainted again with familiar individuals such as Father, Mother, and Sister. And we meet new figures along the way, both from the past as well as the present.

The novel follows the same time-period changing format of the first part, so again the plot is pushed along at a remarkably fast pace. What I liked best was how much more emotional this installment was than the original. It also incorporated X-rated happenings, but the author shed a more humane outlook on the majority of the events that took place in this narrative.

What turned me off was how short this novel was. Sick B*stards was 238 pages long but this piece only amounted to 117 pages. This led to a lack of space for development of the other three major characters. Also, if the length were longer, it would’ve allowed for a more thorough explanation of the occurrences that took place, especially those that were based in the present.

The yarn ended in horrendous fashion, which is a positive aspect given the genre of the tale, but I felt like the writer had much more material on offer than what was ultimately published. Sick B*stards, though inferior to this work, still expanded upon its limited content, whereas Sicker B*stards couldn’t reach its full potential.

Lastly, Shaw has learned from the mistakes that he made with his earlier entry. The descriptions have improved, the story is told from a more humanistic viewpoint, and the ending, though sudden, was also better than that of the previous one. Remember to only read Sicker B*stards if you’ve gone through its prequel. And both parts are definitely worth reading—especially if you’re a lover of horror fiction.