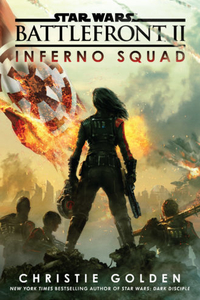 This book serves two purposes. 1. It is a part of the Disney-Star Wars original canon series. 2. It serves as a tie-in to the 2017 Battlefront II’s campaign; as a prequel to the story mode. Furthermore, it manages to be more than just a supporting feature for a video-game’s storyline by actually delivering an unforgettable Star Wars-esque experience.

I wish to make two things clear before proceeding: Firstly, yes I’ve read and reviewed the first book in the Battlefront series called Twilight Company. Secondly, despite this sophomore entry being penned by another author (the original’s Alexander Freed did an amazing job but here the writing style is quite different from his), I was familiar with Christie Golden’s writing style having previously read her other Disney-Star Wars contribution, Dark Disciple (2015). I didn’t like the aforementioned book, but it was mainly due to the far-fetched plot, rather than Golden’s exquisite talent at illustrating characters which readers, like myself, can easily get attached to, no matter where the fictional characters’ loyalties lie.

She does just that with Inferno Squad. The plot, though superior to Dark Disciple’s, isn’t anything you’ve not read before if you’re familiar with Disney’s adult-orientated publications since 2014. The narrative follows the titular Inferno Squad: Captain Iden Versio, Gideon Hask, Del Meeko and Seyn Marana. Besides the latter character, you are acquainted with or will be introduced to the other three members in the game itself.

What separates Inferno Squad (2017) from similar tie-ins is that it is more than just another media product. The stakes are high. The tension can be cut with a knife. The main characters, both the heroes and the villains (depending on the novelist’s point of view), all have their own personalities. Maybe this book would have done a better job if we followed the story through Iden Versio’s perspective (she is the protagonist of Battlefront II’s campaign), but nevertheless, by seeing multiple POVs we are able to appreciate how much research and hard work Golden put into this work.

You’ll especially be amazed with how Golden’s writing allows the secondary individuals to stand out on their own as well. We get to know more about Iden’s mother, Zeehay, whereas she is either briefly mentioned or not mentioned at all in the game. In Battlefront II, Iden’s journey from star of the Empire to aiding the rebels is as clichéd as they come. Here, however, we see that there was a semblance of a conscience in all the team members who are given the main mission which will test not only their allegiance, but their very survival. If this book had been adapted as a major part of the game, then the campaign’s overall predictability would have definitely been lessened by a vast extent.

Golden is excellent at balancing action with emotion – which was also evident in Dark Disciple. Freed was also talented at this, but he was better at executing adrenaline-pumping sequences than writing about how one particular character feels about a particular situation, person, and so on. If we take the case of Dark Disciple, the main plot revolved around romance, and we get a taste of this feature in Inferno Squad, where some subplots encompassed romantic scenarios. However, where lovey-dovey sequences hindered the overall literary impact of Dark Disciple, Golden doesn’t repeat this error in Inferno Squad. By authoring a second Disney-Star Wars novel, Golden has bettered not only Battlefront: Twilight Squad, but has learnt the mistakes she made during the writing of Dark Disciple.

Nonetheless, Battlefront II is still marred by predictability. Like the previous Battlefront novel, it’s not wholly foreseeable, but its conclusion can be read from fifty pages away. Still, the events depicted in the individual chapters allow every part to be incomparable to the next in terms of follow-through, character development, etc.

To end with, I started Inferno Squad with no expectations, especially due to the fact that it essentially serves as a prequel to a story mode with which most gamers were not impressed by. Nevertheless, I ended up liking it more than the game’s story mode itself, which I never thought would be possible. So, if you’re familiar with the SW universe, and want to read a kick-ass Star Wars novel packed with both romance and suspense, then Inferno Squad embodies its title; by delivering a story that is as ignitable as the main reactor of a Death Star.