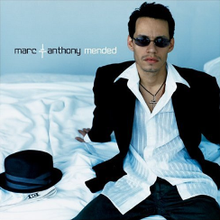 Mended (2002) starts off with the sensational Love Won’t Get Any Better, tones down to the serenade She Mends Me, and then pumps up the volume with the impressive I’ve Got You. It not only follows the opening pattern of Marc Anthony’s 1999 self-titled debut but also manages to possess a consistent tone unlike the latter.

That record failed due to its overproduction of romantic ballads. Mended has its share of melodies but they are adequately balanced with the fast-paced tracks. Again, I must state that Mr. Anthony doesn’t have the dance steps of Ricky Martin or the memorable choruses of Enrique Iglesias, but his vocal prowess is far greater than both.

Lyrically, the album is perfect although majority of the verses are gooey. Besides the penultimate song I Wanna Be Free, the rest talk about love and heartache. I was surprised not to find spicy salsa singles like those included in Mr. Anthony’s previous English release. Still, the swiftly-themed tracks here are quite superior to the salsa numbers included in his previous effort.

It was hard to pick out a favorite from this collection; much like finding a needle in a haystack. But if I were to make a preference then I’d choose the 7th number I Swear over the others. Its sentimental lines and rocking guitar riffs exude originality. This comes as no surprise as Kara DioGuardi is one of the many songwriters credited on this piece.

In the end, Mended is that type of disc which is meant to be played on multiple repeats. It’s not flawless with tracks like I Need You and the final two being monotonous in nature. But it’s as close to perfection as it can be. Mended is undoubtedly one of the most overlooked pop albums of the 2000s decade.