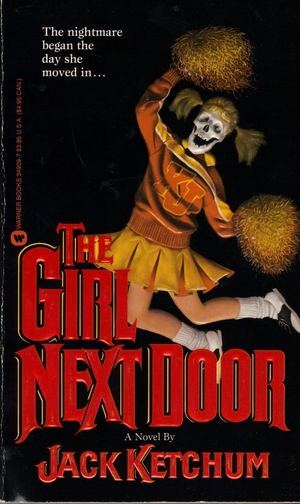 I first got a taste of the late Jack Ketchum’s work after watching the 2011 film adaptation of his and Lucky McKee’s 2010 novel, The Woman. It was directed by McKee, and just like the source material, the screenplay was also co-written by him and Ketchum. The movie also shared a few elements with the novel that I’m reviewing which is titled The Girl Next Door (1989). Before beginning this book, I was introduced to Ketchum’s bibliography by reading his short-story, Returns, featured in the anthology Garden of Fiends (2017). You can read my review of that collection here.

This review is dedicated to the late Jack Ketchum, who passed away earlier this year, on January the 24th, 2018.

The Girl Next Door is Ketchum’s fifth novel. It’s loosely based on the real-life murder of Sylvia Likens, but here many factors have been fictionalized. The plot is told through the first-person perspective of the main character, David Moran, who gets acquainted with the new kid on the block, Meg Loughlin. She has recently moved, along with her sister Susan, to her aunt’s house which is located right next door to the Moran residence. Little does she know the terror that awaits them in their latest abode.

The primary antagonist, Meg and Susan’s aunt Ruth Chandler, is one of the most scary figures I’ve read about on paper. She’s one lean, mean, smoking and torturing machine of a woman. The supporting individuals also come across as frightening though more effort should’ve been taken in describing what they looked like.

The paramount aspect is of course the narrative’s pacing. I’ve never read a horror novel that incorporated such a swift flow of words; and that is the major reason I was able to finish this book in one sitting. Ketchum has been lauded by other big names in the industry such as Stephen King, and now I know why, as his writing style is inimitable. King has stated than any writer who has read Ketchum can’t help being influenced by him, and I myself am in awe of Ketchum’s literary prowess; wishing that I myself possessed his amazing artistry of prose. I also saw a bit of Ketchum in the works of Mark Matthews, another must-read horror storyteller.

However, The Girl Next Door is not without its flaws. I didn’t find the opening chapters at all compelling. The initial twenty to thirty pages made this tale seem like it belonged to the YA category of fiction. A few passages also seemed like they were authored by R.L. Stine and not by a four-time Bram Stoker Award winner. Only when the hardcore sequences appear does Ketchum’s flair for the macabre truly shine, and these scenes also confirm King’s statement when he was asked, “Who’s the scariest guy in America?” to which he replied, “Probably Jack Ketchum.”

In conclusion, The Girl Next Door should be considered mandatory reading for every would-be horror and thriller writer. Ketchum’s imagination is shockingly vivid and he will lead you down a dark path that you’ll never return from. So be sure to mark the dates of your calendar with sleepless nights prior to starting this one. Also, remember that this yarn is not for the faint of heart. I can’t wait to read more pieces from Ketchum’s oeuvre and I’m grateful that I began my nightmarish journey with TGND.