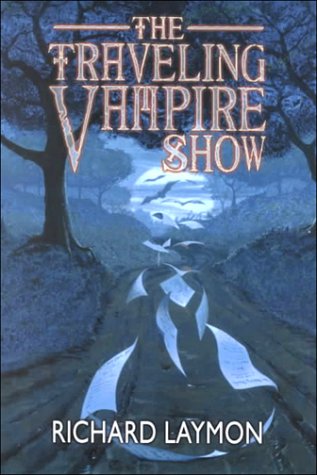 I first found out about Richard Laymon after watching the Top Five Richard Laymon Novels video made and published by Edward Lorn on his YouTube channel. You can watch it here.

The Traveling Vampire Show (2000) is one of his last works as the author sadly passed away on February 14, 2001. The book won the Bram Stoker Award for Novel in 2000—and this has further added to my disappointment after finishing it.

Here’s the synopsis listed on Amazon: When the one-night-only Traveling Vampire Show arrives in town, promising the only living vampire in captivity, beautiful Valeria, three local teenages [sic] venture where they do not belong, and discover much more than they bargained for.

The start is quite engrossing as we’re adventurously introduced to our trio of protagonists: Dwight, Rusty, and Slim. These three friends made for a buoyant group and their interactions reminded me of my own carefree childhood. Characterization is not at all lacking from Laymon as he illustrated all of these main characters to their fullest extents—each with their own unique virtues and weaknesses. I thought that Slim, the female lead, was the most multifaceted individual in the yarn, especially due to her developed backstory. The coming-of-age factor remains constant throughout the narrative, and this is definitely the novel’s strongest aspect.

However, this fiction-piece is not without its flaws. The title is grossly misleading as 80% of the narrative is about the events that lead up to the Traveling Vampire Show. Oftentimes, the plot is thrown all over the place. This is not necessarily bad as this tactic led to the incorporation of many twists and turns in the story, but there were many moments when I felt like I was reading a comedy, and not the work of a horror writer who has been hailed by the likes of Stephen King, Dean Koontz, Jack Ketchum, and others.

I do admit that some sequences did spook me out of my reading space, but these scares were minuscule compared to the banality that encompassed the remainder of the tale. Also, I wasn’t impressed by the 534-page length as most of the story takes place in the span of just one day! The ending was a tad unpredictable but that does not make up for the majority of the yarn being such a tedious read.

In conclusion, I expected a lot more from this award-winning novel. I’m actually dumbfounded that it was nominated for any prize at all. If there were no parts depicting nudity and profanity then I wouldn’t have been surprised if I were reading a young-adult book, albeit, an amateurishly penned one. Laymon’s writing style frequently reminded me of R.L. Stine’s but even the latter’s worst Fear Street paperback would be superior to The Traveling Vampire Show.