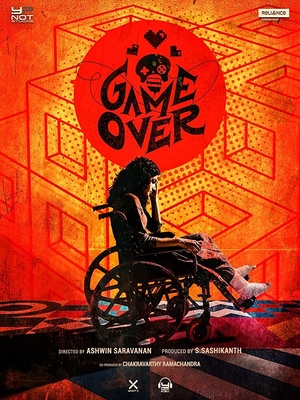 Game Over (2019) follows Swapna (Taapsee Pannu) as she tries to outwit a serial killer who is loose in India. But unlike any other might-be victim she has three chances to escape the fiend’s clutches.

As per the title, Swapna is given three lives and she must try to kill three bosses in one of these lives. The best aspect is that this overall plot has not been used before—at least in an Indian production. The sad thing is that this story comes alive in the third and final act of this movie.

The film starts horrifyingly, albeit amusingly, where a stranger enters a lone young woman’s home and suffocates her via a plastic bag while she is handcuffed behind her back. The funny part is when he proceeds to behead her and kick her head into a newly-constructed and totally inappropriate goal post.

There is no backstory divulging on the killer’s fetish for cut-off heads or whether or not he wanted to become a soccer player but his traditional parents didn’t let him. Nevertheless, the film’s final thirty minutes do justice to the slasher genre. It’s just disappointing that the entire movie doesn’t share the third act’s fast pacing. The start is good, the middle is bad, and the finale is great.

The mid-portion of the flick ventures into boring territory. There is a subplot involving a tattoo on the protagonist’s skin which was made with the remains of the opening scene’s victim. The heroine is then able to see the victim’s memories and also shares an emotional sequence with the dead girl’s mother who was the original inheritor of the tattoo.

But why this secondary narrative was featured is answered later on towards the end. However, only if this subplot had a shorter length then the entire feature would’ve had a bigger impact on the viewers. I was dozing off through the second act but was wide awake during the follow-up.

And this is why most horror entries in Indian cinema are behind Hollywood. The latter manages to balance emotions and high stakes throughout one movie’s running time whereas a Bollywood flick holds separate sections for each emotion; one act for sentimentality, the other for dread, etc.

To end with, Game Over is its finest when it does what it has advertised, but it fails to deliver the thrills with consistency. The acting, costume design (the villain’s mask is awesome and reminiscent of the one worn by Frankenstein in the modern Death Race series), direction and cinematography are all on point, but the writing is lacking as if this was a debut script by the screenwriters. One recommendation that I’d have liked to make to the creative team would’ve been to use a handheld directorial style throughout the venture, as using it occasionally to add more spontaneity in this picture made such scenes look superficial and humorous. Also, if you want to watch a film which balances horror and drama better than Game Over then catch Annabelle Comes Home (2019) if you get the opportunity.